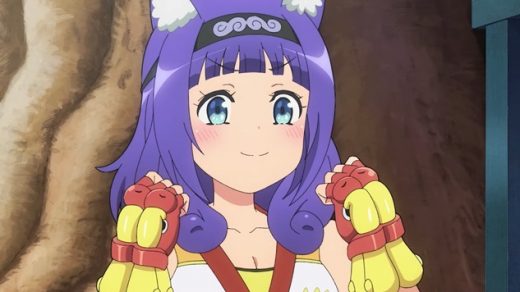 Anyone who is a big anime fan knows every new season there will be a number of cute anime girls who would suit the job of “waifu” very well.

Girls like Immoral Guild‘s Hitamu Kyan — a cute waifu type who just got her very own character video. One of five that will be out in the next few weeks.

So much so, Hitamu is constantly getting attacked by monsters. Something even protagonist and expert monster hunter Kikuru Madan cannot always prevent.

Hitamu Kyan is voiced by Karin Isobe, straight off her recent role as Kana in Healer Girl.

The Immortal Guild (aka Futoku no Guild) anime series is based on the manga written and illustrated by Taichi Kawazoe.

There are nine volumes of the manga out in Japan so far, with Square Enix publishing the manga in English.

They have this to say about the Immortal Guild‘s plot:

An incompetent martial artist, a crabby white mage, a lazy black mage, and a drunk warrior. These four newbie guards confront monsters to protect the peace of their town.

Our heroines continue to be humiliated day after day in this controversial(?) story!

Watch the cute Hitamu Kyan character video below, and look out for the second one featuring Maidena Angers coming out next week.