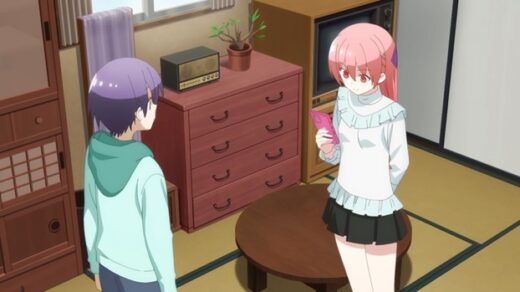 A new TONIKAWA Valentine’s Day key visual has been released and, wow, is it the sweetest thing!

The TONIKAWA: Over the Moon for You! visual has Tsukasa presenting a box of chocolates to the person she loves with the cutest adoring look on her face. That person, of course, is her husband Nasa.


The new visual is one of a series featuring Tsukasa.

Others feature Tsukasa in a Santa costume, wearing a kimono, in a bikini at the beach, in a coat suitable for autumn and even going for a sakura viewing in a pink sweater perfect for the season.

TONIKAWA: Over the Moon for You aired in late 2020, and was one of the most popular anime of the Fall 2020 season.

TONIKAWA: Over the Moon for You is based on the manga by Kenjiro Hata.

It tells the story of Nasa, who gets into a truck accident one day and whose life is saved by a mysterious girl. When he follows the girl to a bus stop while on the verge of collapse and tells her he loves her, she accepts his love.

Then adds, she will only go out with him if they get married first. And then she disappears.

But, on his birthday the girl, whose name is Tsukasa, appears on his doorstep with a marriage certificate, and takes him to the registry office where the two get married.

Thus the newly married life of Tsukasa and Nasa begins.

Watch the first season of TONIKAWA on Crunchyroll, and enjoy that lovely Valentine’s Day visual above.

A special episode and a second season of the romantic comedy is also currently in production at Seven Arcs, with a likely premiere some time later this year.