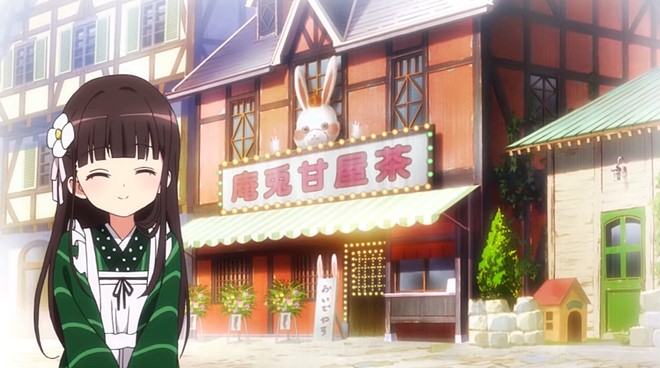 Is the Order a Rabbit? BLOOM, the third season of the popular anime series, has just released a new promotional video. This one is Chiya Ujimatsu’s character video and, man, does it show her off in all her absolute loveliness.

Chiya, of course, is one of the main characters of Is the Order a Rabbit? BLOOM.


She is the nice girl whose family runs a sweet shop and connecting cafe, but a nice girl with a little bit of a dark side (remember the ghost stories she tries to frighten her friends with?)

She is also a little bit of a not-so-closeted-yuri-oriented friend, as she once stole Sharo’s panties and, of course, has had a few racy (and very funny) scenes with Cocoa.

In Chiya Ujimatsu’s character video then, we get to see all sides of one of our favorite main girls. From when she is working at her parents’ cafe all beautifully dressed up in traditional Japanese dress, to when she is showing off her ‘sporty side’ and, of course, her pleasant personality and her love for all of her friends.

The third season of the popular anime is being directed by returning director Hiroyuki Hashimoto, Kazuyuki Fudeyasu is in charge of series scrips and Yousuke Okuda is back as character designer.

All of the original cast from the first two seasons of Is the Order a Rabbit? are also returning to reprise their roles.

Is the Order a Rabbit? BLOOM (aka Gochūmon wa Usagi Desu ka? BLOOM) premieres on Saturday in Japan on AT-X. (article continues below…)

Sentai Filmworks has licensed the anime series for both digital release and home video in North America sometime in fall, 2020. Crunchyroll will also stream the new series as it airs in Japan.

In other words, only a few more days to go until all our favorite girls are back. Yay!

Until then, watch the just-released Chiya Ujimatsu character video and reminisce about why we love these adorable girls so much. The video also features the third season’s incredibly catchy opening theme song ‘Tenkū Cafeteria‘ (天空カフェテリア) by Petit Rabbit’s.