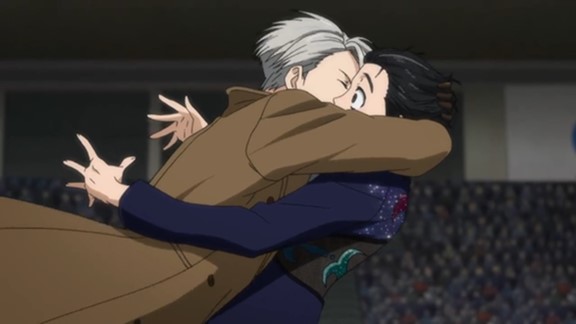 One of the things too many fans of Yuri on Ice!!! talk about is that the anime is a Boys’ Love anime or a gay anime.

In fact, it is neither.


Neither can the anime be called yaoi or a shounen-ai.

In fact, what Yuri on Ice!!! is for anyone hoping for a gay-positive anime or a Boys’ Love series is a whole lot of nothing and, in my opinion, a bit of a disappointment.

Of course, you have the rabid fans who love Victor and Yuri, and insist on calling Yuri on Ice!!! a Boys’ Love anime.

They would be wrong.

After all, in a typical BL anime series, the idea that two of the main male characters are in love with each other would be obvious, and not left as entirely ambiguous like it is throughout most of Yuri on Ice!!!

Especially when there are subtle hints the pair may have already kissed and spent the night together, but the hints are so casual, if you blink you will miss them.

READ: 11 of the best and most fabulous Boys’ Love characters in anime today

Nor would a BL anime shy away from showing viewers a kiss between two men, just like Yuri on Ice!!! did in Episode 7, with Victor and Yuri supposedly kissing as Yuri ends his main performance, but with the kiss hidden by Victor’s arm.

And before people jump to the anime’s defense by saying a kiss between two men wouldn’t be acceptable in Japan, try to remember all the other anime that have managed to include them — Junjou Romantica, Sekaiichi Hatsukoi, Hitorijime My Hero, Dokyuusei, From the New World and Super Lovers — just to name a few.

And, in a couple of cases, over a decade before Yuri on Ice!!! was even released.

None of them were anime that were overtly sexual, as they skipped all the graphic scenes found in their respective manga, but they did manage to feature two men kissing — many times, in some of them.

Then, when you also consider the exchange of rings in Yuri on Ice!!! in Episode 10 is dealt with in an almost homophobic way as Yuri starts shouting the rings don’t mean what you think they do and, no, this isn’t a Boys’ Love anime as it isn’t gay-positive at all.

Even when you consider that almost-last scene at the end of Episode 12 when Victor and Yuri are skating together.

Think I’m wrong on this?

Ask any number of gay men if they think Yuri on Ice!!! is a Boys’ Love anime, and I guarantee you most of them will say “No”.

That being said, if you are looking for a decent sports anime (and don’t mind the annoying cartoon-like scenes that get shoved in, and the clunky animation when Yuri is skating), and a lovely art style, then Yuri on Ice!!! definitely offers that in spades.

It’s just not a Boys’ Love anime and that really is a shame as, if it had been, the anime would have been so much more.

Watch Yuri on Ice!!! on Crunchyroll. Just don’t call it Boys’ Love when you do.