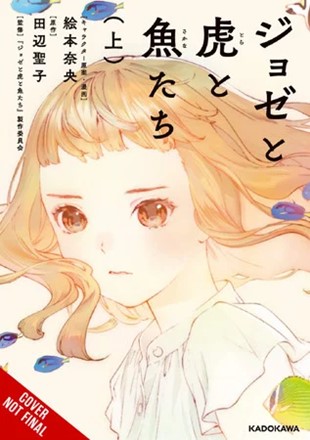 For fans of the anime movie Josee, The Tiger and the Fish, the latest news from Yen Press is sure to please.

That’s because American publisher Yen Press has just announced they have licensed the Josee, The Tiger and the Fish manga for release in North America.

Josee, The Tiger and the Fish tells the story of wheelchair-bound Josee,  who has always lived her life through pictures, books and her imagination.

Until she meets Tsuneo, a college student who soon becomes her friend.

READ: Watch 5 minutes of the Josee, The Tiger and the Fish movie in Eve’s new music video for the film’s theme song ‘Ao no Waltz‘ — it’s gorgeous!

As the pair grow closer, Josee decides to move away from her narrow life and experience the world outside. With Tsuneo by her side, she has the courage to do so, but will the relationship last?

Josee, The Tiger and the Fish (ジョゼと虎と魚たち, Joze to Tora to Sakana-tachi) was written by Seiko Tanabe, with illustrations by Nao Emoto.

The original short story was first published in 1984 in Monthly Kadokawa, and was adapted into a successful anime film in 2020 by animation studio Bones.

Its hardcover light novel will also be available next month via Yen Press.