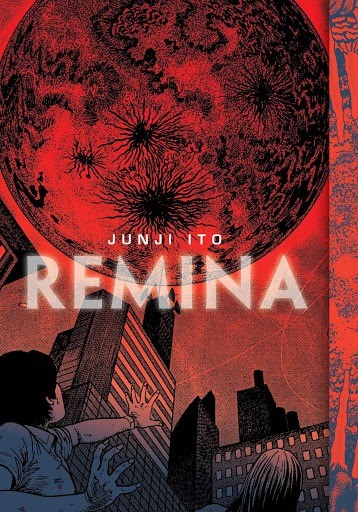 When it comes to Japanese manga, there really isn’t anyone more well-known than horror mangaka Junji Ito.

The master of horror manga, he is one of the most successful mangaka in Japan, and already an Eisner Award recipient for his adaptation of Mary Shelley’s Frankenstein.

This weekend, Junji Ito won two more Eisner Awards for two separate works during the 2021 Eisner Awards. The awards were announced during San Diego Comic Con, which was held virtually this year.

The first Eisner Award went to Junji Ito for Best U.S. Edition of International Material — Asia, for his Remina manga.

He received the second in the category Best Writer/Artist for both Remina and Venus in the Blind Spot. (article continues after ad…)

Remina was released in the U.S. in late 2020, with Viz Media describing the manga series’ plot this way:

An unknown planet emerges from inside a wormhole, and its discoverer, Dr. Oguro, christens the body “Remina” after his own daughter. His finding is met with great fanfare, and Remina herself rises to fame. However, the object picks up speed as it moves along in its curious course, eliminating planets and stars one after another, until finally Earth itself faces extinction… Is the girl Remina the true cause of the catastrophe? A masterwork of horror from Junji Ito, unfolding on a universal scale.

Venus in the Blind Spot was released in August of the same year:

This striking collection presents the most remarkable short works of Junji Ito’s career, featuring an adaptation of Rampo Edogawa’s classic horror story “Human Chair” and fan favorite “The Enigma of Amigara Fault.” With a deluxe presentation—including special color pages, and showcasing illustrations from his acclaimed long-form manga No Longer Human—each chilling tale invites readers to revel in a world of terror.

Viz Media publishes both books in the United States, with Shogakukan releasing them in Japan.