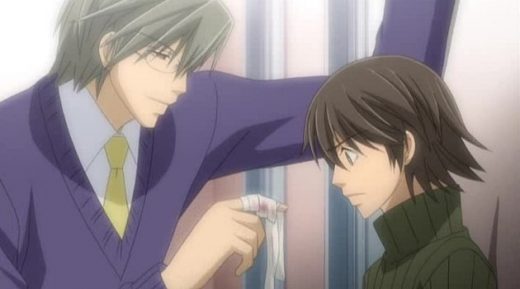 Is it just me, or do you too often end up loving the ending theme song of an anime series rather than its opening theme?

Take the Junjou Romantica Season 2 ending theme song — ‘Aoi’ by JUNED (aka 相生-アイオイ- in Japanese). A song that has been stuck in my head all week since I binge-watched all three seasons of that superb Boys’ Love anime.

Because that song, which was JUNED’s debut single by the way, is an absolute banger compared to that season’s opening theme.

And, nowadays sadly, also a helluva difficult song to find as, due to JUNED themselves being an extremely short-lived band, ‘Aoi‘ never did make it onto Spotify or Deezer.

That left me scrambling through YouTube trying to find a full-length version of JUNED’s ‘Aoi‘ so I could download it as an MP3, before the only version seemingly around disappears as well.

In other words, if you are as big of a fan of JUNED’s ‘Aoi‘ as I am, and as obsessed with Junou Romantica (it truly is a sickness for me at this stage!), here is the full-length version of that amazing song for your edification.

Because, Good Christ, with these lyrics so perfectly suited to Usagi-San and Misaki in that wonderful anime, who the hell could let this superb track just disappear?

Crossing paths only at the end of the day
how long have you been dancing around, waiting for me up there?
you double my feelings of happiness
and halve my feelings of sadness

from now on, whatever path I walk
surely it will continue toward you

that promised place always smells like sunshine
and illuminates my footsteps
“I like you.” I like the me that can say that, therefore
softly in my heart, I whisper, “thank you.”