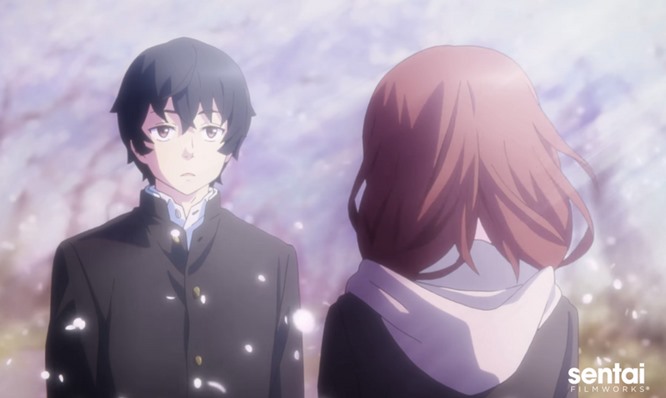 One thing I always look for when I add an anime theme song to Leo Sigh’s Best Anime Songs list is the feelings it evokes in me and, of course, if I think it expresses the theme of the anime story and its characters well.

One song I have absolutely no problem adding to that list then is the Just Because opening theme song — ‘Over and Over‘ by Nagi Yanagi — an anime I actually only watched this week, but a singer I have been familiar with for a long time.


Because ‘Over and Over‘ by Nagi Yanagi perfectly illustrates the theme of Just Because.

The way each character is in love with another, but is too shy to tell them. The way each often watches the other from afar, but is too afraid of being rejected to walk closer to them. How almost every character is soon graduating and will then move on with their lives, far away from the person they currently love. Yet, with the two main characters, Eita and Mio, even that soon-to-come-separation (at least as far as Eita is concerned) does not force them to confess how they feel before it is too late.

And, frankly, while I was not particularly satisfied with the ending of Just Because as, like many people, I felt Eita had a much better chemistry with the bouncy and exuberant Ena than with moody and, frankly, quite mean Mio, the lyrics of Nagi Yanagi’s ‘Over and Over‘ were a wonderful representation of Eita’s feelings towards Mio.

Your face leaves an impression as I watch you from the side,
Watching you smile in a way I’ve never seen before.
You seem like someone from a parallel world.
In the time I spend spaced out,
You keep walking even further beyond

Listen to the lovely Just Because! opening theme song — ‘Over and Over‘ by Nagi Yanagi below — an easy addition to Leo Sigh’s Best Anime Songs list.

Nagi Yanagi, by the way, also wrote the music for the entire Just Because! series, plus was the singer for the OPs of Berserk, My Teen Romantic Comedy SNAFU (all three seasons) and Amnesia to name just a few of the many anime songs she has wonderfully performed.

You can currently buy Just Because! on Blu-ray from Sentai Filmworks.