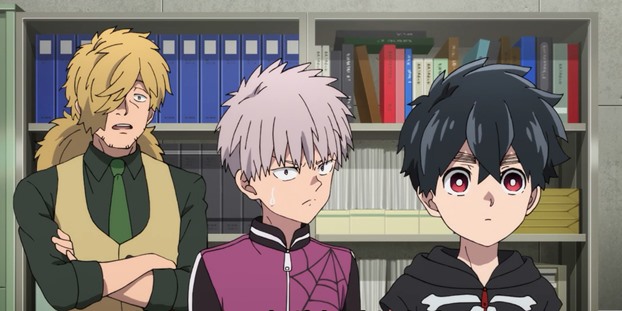 If you want to see just how powerful Kemono Jihen‘s Kabane actually is, this Kemono Jihen, Episode 3, “Foxes” recap and review will do that for you in spades.

Because not only does Kabane show he is even more kickass here than we saw in Episode 2 when he confronted the Sanshichu bugs, but it is the first time we really get to see his full potential. And, man, is it astounding.

Especially when you consider only a couple of episodes ago, Kabane was doing nothing but working for his aunt with no idea of who he was or what he could actually do. 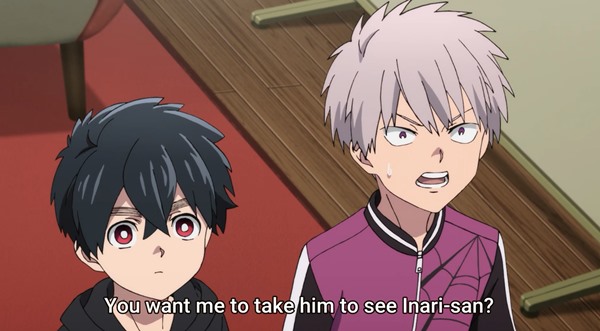 At the end of Episode 2, viewers were left wondering if Inugami’s intentions were as nice as they seemed, or if the Kemonoist had ulterior motives when he agreed to let Kabane live at the Kemonoist offices.

After all, the last time we saw him, he was calling someone and telling them all about Kabane and his lifestone, without Kabane himself having a clue the phone call was taking place.

When Kemono Jihen, Episode 3, “Foxes” begins, however, we quickly learn who was on the other end of Inugami’s phone — Inari Yoko, a kitsune, who according to Inugami holds a huge amount of influence over the police.

So much so, Inari is currently at the police station with every police officer there kowtowing to her every whim.

Inugami sends Kabane, Shiki and Akira to the police station at the request of Inari but also, as Inugami explains, because “when you are a detective, you have to ask police for a lot of favors”, and he thinks Inari is a good person to know.

Before they leave, he gives Kabane a “lucky charm”, and tells him to be sure to keep it with him at all times.

At the police station, they meet Kon, a kitsune (fox) who works for Inari and, while Shiki is arguing with a police officer about them having an appointment with Inari, Kon tells them Kabane is the only person of the three Inari wants to see.

So Kabane heads off with Kon to meet her. 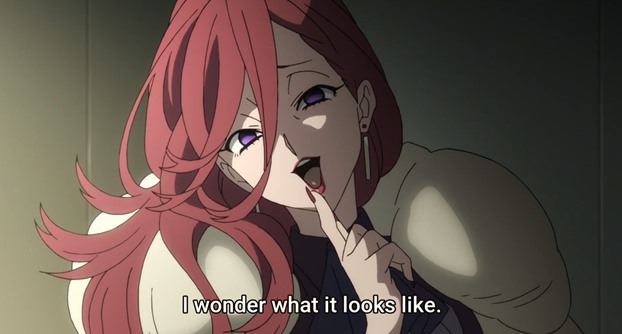 When Kabane meets Inari, however, it is obvious right from the get-go the only thing the kitsune is interested in is seeing and then stealing his lifestone.

Right after she tells Kabane she and Inugami never did get along, Kabane, being naive, hands her the lifestone when she asks to look at it ‘closer’.

She then tells him, now that he has shown up with the lifestone, her relationship with Inugami can change. After all, with a lifestone, it means Kemono no longer have to feed off humans as they can use the lifestone instead.

Inari then has Kon cut off Kabane’s head, telling the police officers who are in her thrall to put the head in a suitcase and to dispose of the body. Otherwise, his body will grow back.

Kon offers to carry the suitcase holding Kabane’s head, and Inari leaves telling Kon to “deal with the friends Kabane came with”.

By now, however, Shiki is getting tired of waiting for Kabane, while Akira is outside taking photos for his social  media accounts.

So when Kon, who has transformed into Kabane, appears carrying a suitcase, Shiki gives him a piece of his mind.

Akira,  however, asks about the suitcase and, when Kabane/Kon responds it contains something he has to deliver to Inari’s room, Akira remarks “Kabane-kun, something seems different about you”.

At that point, Shiki makes a rude comment about Inari and Kon gets angry, so transforms into her true form — a kitsune.

Shiki and Akira immediately realize this cannot be Kabane, so Kon transforms back into her ‘young girl’ form and tells the pair she will kill them.

A huge battle ensures in the police station, but nobody notices the fights or the flames that are engulfing the building as everyone in the station is under the thrall of Inari.

But, as Kon shouts she will kill them as she is a “good girl” and does what Inari tells her to do, Shiki uses his spider web to snake up to the balcony where Kon is standing, grab the suitcase she is holding and pull it down to himself.

When the suitcase is open and Shiki and Akira see Kabane’s head looking back at them and, as Kabane’s head says “Shiki”, Akira faints.

Shiki carries both Kabane’s head and the fainted-dead-away Akira up to the balcony to hide from the now-raging Kon.

Kabane then tells Shiki to throw his head at Kon as, if he throws it correctly, he knows just how to “take her down”.

Shiki throws Kabane’s head, just like a football, in the direction of Kon. As Kabane hits her, he bites her in the shoulder. Kon faints and Shiki rushes in to retrieve Kabane.

The flames disappear, nobody has noticed anything and Shiki realizes the fire was just an illusion created by Kon to frighten them.

Kabane then tells Shiki “Give me a little room” and Shiki holds his head away from him. That allows Kabane to regenerate his body and so he is soon back to normal.

Except, of course, he is naked.

Kabane, Shiki and Akira leave the police station and head back to the Kemonoist office to tell Inugami what has happened, but bump into Inugami just outside the station. 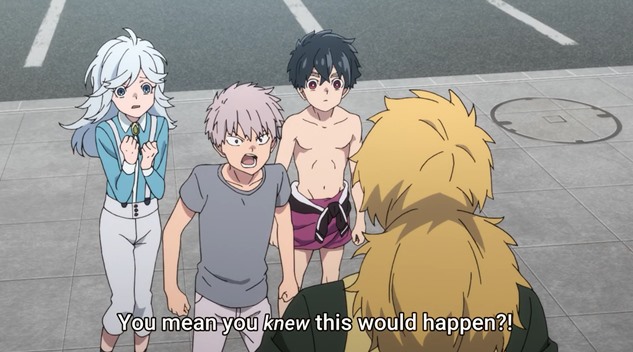 It is then Inugami tells them it looks like things went just the way he expected, with Inari stealing Kabane’s lifestone.

At that moment, Inugami calls Inari to tell her she betrayed him, and that his people barely escaped with their lives. Because of that, Inari now “owes him”.

He also reminds her, “next time, you’ll be dealing with me. Don’t forget that”.

Inari is so angry she screams, causing the car she is being chauffered in to crash.

Inugami and the kids then go out for Chinese food and pancakes to celebrate both their victory and Kabane’s new life with them. 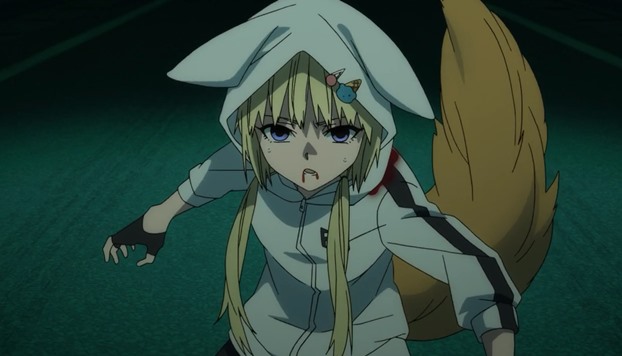 After dinner, they are on their way back home when Kon suddenly shows up in a darkened street demanding Kabane’s head.

But, as she rushes forward to attempt to get it, she passes out in the street. As she lies there with her stomach rumbling, they all realize she is hungry, so Inugami takes her back to the office to feed her pizza.

While she eats, Kon tells Inugami she is “a good girl”, so she must finish her mission by retrieving Kabane’s head and taking it to Inari.

Inugami responds, if she was the good girl Inari likes, she would say thank you for the meal and then clean up after herself.

The episode ends with a new client stumbling into the office asking for help.

As I watch each new episode of Kemono Jihen, it becomes obvious this is a series that does not rest on any laurels earned in the previous episode.

Instead, each new episode ups the ante with better action scenes, new even more interesting characters, continually beautiful art work and a plot that is equal parts exciting and surprising.

That there are hidden depths to Inugami, and that Kabane is turning out to be majorly overpowered, make this anime series even more appealing.

Of course, Inari is likely to be a problem as the series continues, while Kabane will become stronger, Shiki will show us what he can really do, and even ‘useless Akira’ is likely to have hidden depths we have yet to plumb.

I also have a feeling Kon may end up closer to the Kemonoist detectives. Even if she hasn’t quite figured that out herself yet.

All in all, each new episode of Kemono Jihen is an utter delight and a show you cannot stop watching, it really is that good.

Kemono Jihen, Episode 3, “Foxes”, however, was the best episode yet.