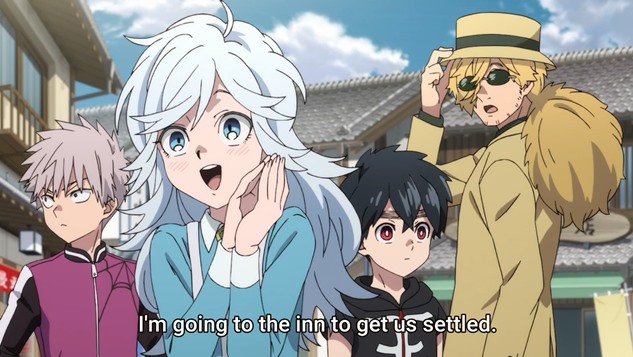 Kemono Jihen Episode 7 “Home” focuses on Shiki and the search for his parents more than it advances Kabane’s story.

The episode begins with Inugami, Shiki, Akira and Kabane heading to Kinshigo, the town where Shiki was born. They are looking for his parents but plan on finding his uncle Akio Tademaru first, as Shiki used to live with him when he was a little boy, so he may have information about his mother and father.


Upon arrival, Inugami goes to find Shiki’s uncle and the rest of the group visit a souvenir shop where they look at local goods and Kabane reads a book about a local legend. Shiki notices a young girl standing in the doorway of the shop staring at them, but Inugami arrives with Shiki’s uncle Akio and distracts them. 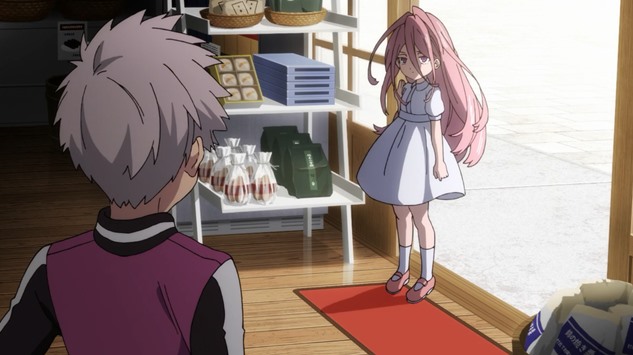 Heading to the forest, Shiki thinks he hears someone calling his name. Akio introduces himself as the brother of Shiki’s father and, even though he is human himself, an expert on Kemono.

Kabane asks Akio what kind of child Shiki was, and Akio replies “rambunctious and always getting into trouble”.

Shiki interrupts and says “That’s not why we came”, and Akio begins to talk about Shiki’s mother.

He tells the group, back when he was a student he accompanied Shiki’s father into the woods to do research on the folklore of the area. That’s where he met Shiki’s mother, but that there are other things he needs to know as well.

Inugami tells Kabane and Akira they should leave Shiki and his uncle to talk alone, so the trio go to buy ice cream. A few minutes later, Shiki arrives and, when asked what his uncle told him, tells them his uncle says both his parents are dead.

Shiki tells them not to be depressed as he already thought they were dead, and now he knows the truth. He then tells them his uncle said his father died before he was born, and his mother got sick and died when he was just five. He also adds the reason Shiki is carrying so much trauma is because he saw his mother’s dead body.

In the evening, Kabane, Akira and Shiki go to a hot springs to relax. As they sit in the water the door opens and Nobimaru appears., and scolds Kabane for not telling him he was leaving town.

Nobimaru tells them he has heard there are fireflies on the waterfront and suggests they go to find them. As they watch the lights from the fireflies flickering in front of them, however, Shiki hears a woman calling his name again and wanders off until he comes to a tree he believes he recognizes. 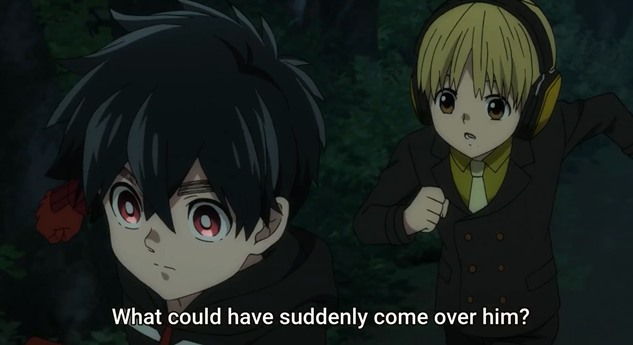 Suddenly, he remembers he used to use the tree as a marker to find his way home and sets off running in the same direction with Kabane and Nobimaru chasing and wondering where he is going.

As he runs, he remembers the trail leads to his mother’s house and also pictures the last time he saw his mother when she told him she had to work at his uncle’s house, but he must not follow her.

On that specific day, however, Shiki became impatient and went to his uncle’s to find her. But when he opened the door of the shed where she was working,  he saw his mother chained to a table being artificially inseminated, and a monster looming over her. As he stared, someone hit him on the back of the head and he lost consciousness.

When he woke up, he was at his uncle’s who told him his mother was very sick but that she would be alright. Shiki waited for months for her to heal and come home, but he never saw her again. 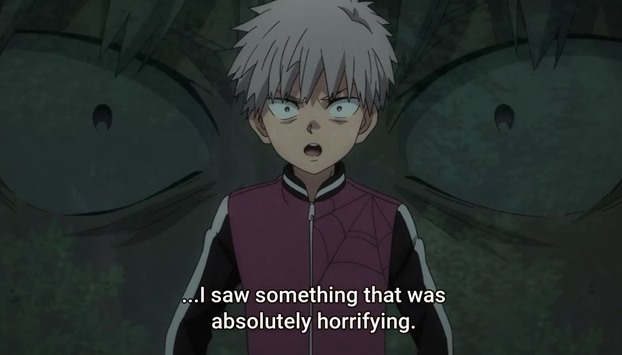 In the present day, Kabana and Nobimaru arrive at the shed at the same time as Shiki who has now collapsed on the floor.

Nobimaru sees old artificial insemination needles thrown on the floor and tells Kabane about a substance called ‘healing silk’ that could be used as a substitute for missing cells and could even be woven into organs.

He comments that Inari suppressed information about it, so that people couldn’t buy it, but that she also put someone on a black list.

When Kabane asks about the person on the blacklist, Nobimaru says it was Shiki’s uncle Akio, and he was put on the blacklist because he tried to use Kemono knowledge to make himself rich and famous.

Shiki then wakes up, curses his uncle and everything he has done, and tells Nobimaru he will have his revenge on him even if it means killing him.

The scene changes to Inugami arriving at Akio’s house, which used to be the house owned by Shiki’s parents, and asking to talk to Akio.

Soon, the two men are walking in the forest and Inugami asks Akio about the ‘golden spider webbing’ he used to want to sell.

“I understand you did everything you could to sell that”, he says. “But you weren’t able to, as some strange force kept stopping you. Am I correct?”

Akio asks if Inugami was to blame, but Inugami tells him it was a woman he knows. Akio then blames him for stopping his work and his ability to sell the thread, and asks him why he did it.

Inugami replies, “You still don’t understand that you did something wrong. That is why you’re so open about this”.

As Akio continues to say he did nothing wrong, Inugami asks him, “If you didn’t, where did you get this wonderful silk thread?”

Akio explains both he and his brother thought the thread was probably the same substance that appears in the local legend — the same story Kabane read at the gift shop. But, as they were planning on investigating its source further, his brother (Shiki’s father) slipped and fell to his death. (At least that is what Akio says and believes).

Not long after Shiki’s mother Kumi had her baby (Shiki) but he soon became sick. She brought him to Akio to ask for help and he took him to the hospital. Getting that kind of care, however, required money. Money Kumi didn’t have.

So Akio approached her with a proposal. Spin the golden thread, he would sell it and she and Shiki would always have enough money for things like medical care, food and a home. 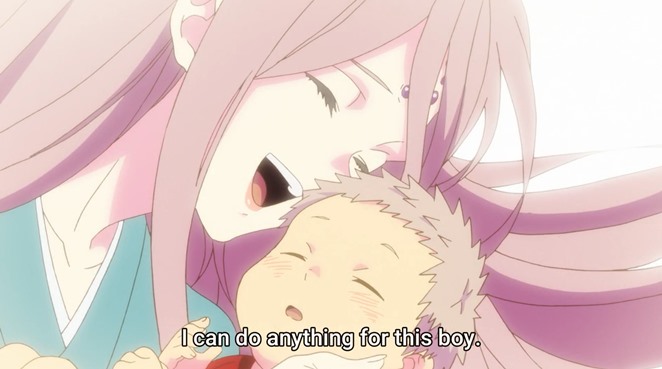 He went on to explain he used Kumi as an incubation facility and impregnated her over and over again as she had sex with all kinds of different Kemono living in the forest.

About the time she was going to stop, Shiki stumbled across the test facility and Akio had to hit him over the head to prevent him understanding what was really going on.

At this point, it is obvious Akio is insane as he does not understand what he did was not only wrong but cruel, as all he talks about is how he and Kumi finally created the ‘golden thread.

He then tells Inugami, because of his ‘discovery’ of the golden thread, he will soon be the most famous man in the world.

At this point, Inugami says “And there you have it Shiki. What do you want to do?” and holds up the phone that has been turned on all the time so that Shiki can hear what his uncle says.

Shiki appears, captures his uncle with webbing around his neck and pulls him high up into the trees and tells him, “I haven’t forgotten that you took care of me. So I will make sure you don’t suffer when I kill you”.

You will find recaps for the rest of the first season of Kemono Jihen on Leo Sigh here.