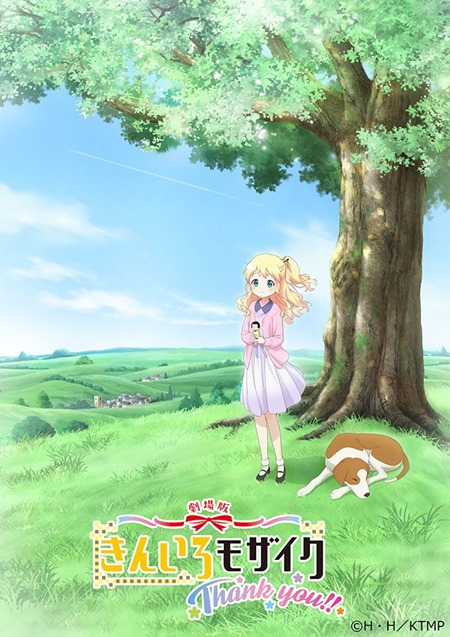 Information about the official title for the upcoming Kin-iro Mosaic film was released today. The announcement came during a live-stream of a panel featuring the main cast members. The film’s title? — Kin-iro Mosaic Thank you!!.

Along with the title announcement, a new Kin-iro Mosaic Thank you!!! key visual was also released.

The pretty artwork features main girl Alice Cartelet and her dog in a field close to her house in England. Alice is holding a kokeshi doll that she thinks looks just like her Japanese friend Shinobu. (see video below)

The Kin-iro Mosaic Thank you!! film and the anime series is based on a manga by Yui Hara.

The movie is being directed by Munenori Nawa (Otoboku – Maidens Are Falling for Me! ), the screenplay was written by Yuniko Ayana (BanG Dream!, Hello!! KINMOZA, Kinmoza! Kiniro + Mosaic), and character design is by Kazuyuki Ueta who is also the character designer for the main anime series.

In fact, much of Kin-iro Mosaic Thank You!! is the same or very similar to the original two anime series and the previous short movie. The only worrying part for some fans is the change in director for the new film.

But, as Munenori Nawa was either the Assistant Director or Episode Director on both seasons of the anime series and the previous film, it is not likely he will be directing in a markedly different way than previous director  Motoki Tanaka.

An official release date for Kin-iro Mosaic Thank You!! has not yet been announced, but the first two seasons of the anime series are currently streaming on Crunchyroll.