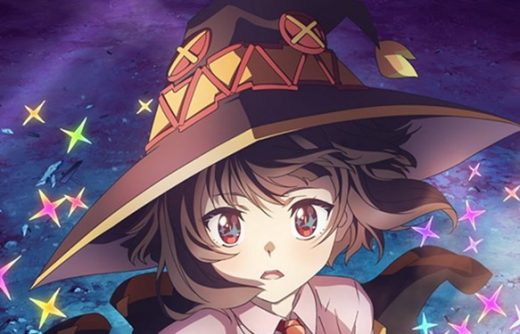 Rie Takahashi and Aki Toyosaki starring as Megumin and Yunyun

Along with the announcement of KonoSuba Season 3 now in production, the official KonoSuba website has just announced there is a new anime adaptation of the KonoSuba: An Explosion on This Wonderful World! light novels on the way.

A KonoSuba: An Explosion on This Wonderful World! key visual was also released, along with the names of the two cast members, and information about staff.

According to the website, Rie Takahashi will be back to play Megumin, with Aki Toyosaki reprising her role as Yunyun, Megumin’s friend and self-professed rival.

The spin-off anime is being directed by Yujiro Abe (episode director of Kaguya-sama: Love is War), with Chief Director Takaomi Kanasaki supervising.

Screenwriter of the main KonoSuba series, Makoto Uezu, will be in charge of scripts, with usual KonoSuba character designer Koichi Kikuta working on the anime as well.

The animation studio Drive (Vlad Love) is in charge of anime production.

Yen Press is publishing the English language version of the KonoSuba: An Explosion on This Wonderful World! light novels, written by Natsume Akatsuki and illustrated by Kurone Mishiima, with three volumes out.

They describe the plot of the novels like this:

One year before a certain useless goddess and NEET extraordinaire hit the scene, Megumin, the “Greatest Genius of the Crimson Magic Clan,” is hard at work.

Ever since a life-changing encounter in her youth, the young wizard has dedicated her every waking moment to the pursuit of the ultimate offensive magic, Explosion! (Well…every moment not spent hustling food from her self-proclaimed rival.)

And while the big sister’s away, the little one will play. On a routine trip into the woods, Megumin’s little sister, Komekko, finds a strange black kitten. Little does she know that this cat plays a key role in unsealing a Dark God’s tomb…

There is no word yet on when the KonoSuba: An Explosion on This Wonderful World! anime will release but, if it’s as good as the main KonoSuba series, it should be phenomenal when it arrives.

RELATED: How to watch KonoSuba in the right order — series, OVAs and film