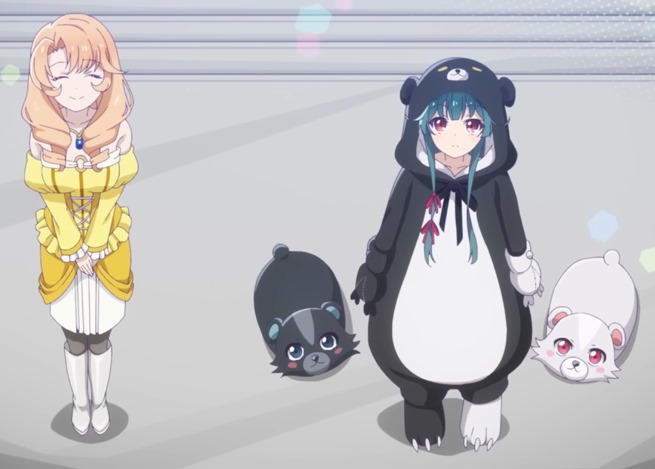 It has been a while since the first season of the fantasy comedy anime Kuma Kuma Kuma Bear ended (December, 2020 to be exact), and I have been worrying for a while that it may be a long time until the promised Season 2 arrives.

With today’s news, though, that worrying was misplaced on my part as the premiere of Kuma Kuma Kuma Bear Season 2 is now confirmed for April, 2023, and we’ll soon be getting a lot more of Yuna.

Along with the premiere date today, we also got the anime’s first trailer and a very cute first Kuma Kuma Kuma Bear Punch! key visual.

That visual features Yuna, Fina, Kumayuru and Kumakyuu apparently airborne, and flying high up over the city of Crimonia.  Yuna, Fina and Kumayuru look happy to be there, while Kumakyuu appears to have fallen asleep. Yikes!

It has also been confirmed that Maki Kawase will return as protagonist and bear onesie-wearer Yuna, with Azumi Waki reprising her role as the ever devoted Fina.

Like the first season of the anime, Kuma Kuma Kuma Bear Punch! is based on the light novel series written by Kumanano and illustrated 029.

Studio EMT Squared is back in charge of anime production.

The English versions of both the light novel series (13 volumes) and manga adaptation (6 volumes) are being published by Seven Seas Entertainment. With that number of volumes, never mind Season 2, we should get Season 3 and on, right?

Fifteen-year-old Yuna prefers staying home and obsessively playing her favorite VRMMO to doing anything else, including going to school. When a strange new update gives her a one-of-a-kind bear outfit that comes with overpowered abilities, Yuna is torn: the outfit is unbearably cute, but too embarrassing to wear in-game.

But then she suddenly finds herself transported to a world like the game, facing down monsters and magic for real, and the bear suit becomes the best weapon she has!

Watch the first Kuma Kuma Kuma Bear Punch! trailer below. Now do you remember how cute they all are?