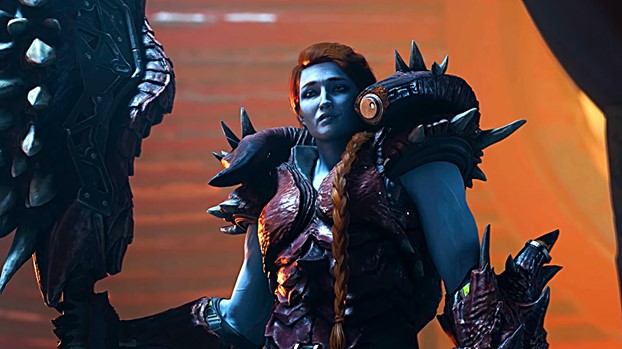 Marvel’s Guardians of the Galaxy video game got a new trailer today featuring yet another enemy the band of heroes will face.

This time it is Lady Hellbender. An opponent that is quite a bit more lethal than she may at first suggest.


When the game arrives on October 26th, Eidos-Montréal’s Marvel’s Guardians of the Galaxy will have the heroes heading across space to fight a whole new army of threats.

Threats that include Lady Hellbender, who is both a queen of Seknarf Nine and a monster collector.

The just released Lady Hellbender trailer begins with the protagonist talking to a monster seller, while checking out one of his products — the dreaded Tara-tara.

As the Guardians arrive to talk to her, the seller is literally being ripped apart by his own monster while Lady Hellbender looks on in glee.

But it isn’t all blood and gore when dealing with the woman, as Lady Hellbender quickly proves. Instead, she is also smart, flirtatious and knows exactly what buttons to push.

Marvel’s Guardians of the Galaxy will be coming to Xbox One, Xbox Series X/S, PS4, PS5, Nintendo Switch and PC on October 26th.

Check out the just released Lady Hellbender trailer below, and learn more about the game here.