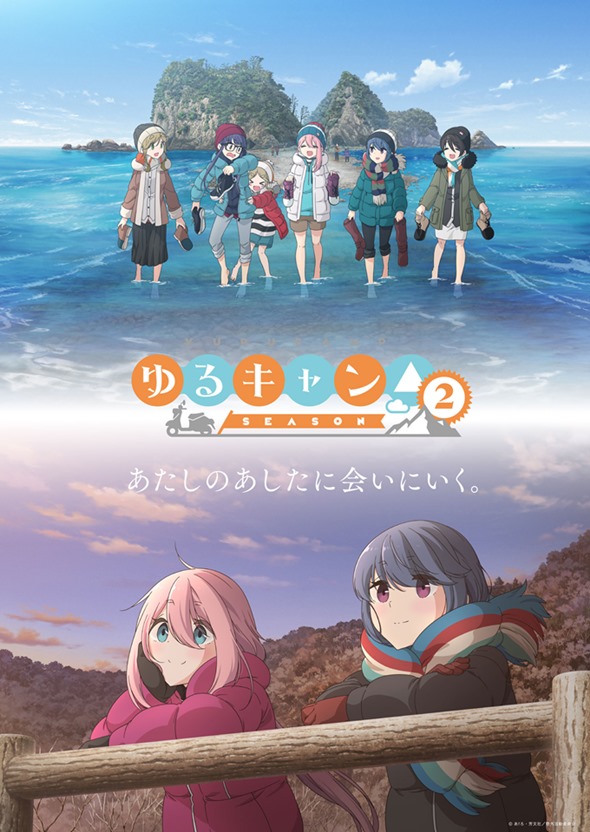 The latest Laid-Back Camp Season 2 key visual #5 was released today, and this time shows the girls paddling in the ocean and having fun. A second scene in the same visual has Rin and Nadeshiko staring blissfully over a guardrail to a scene below.

Along with the designs, we also learned the voice actors from Season 1 will be returning to reprise their roles — thank God!

The first season of Laid-Back Camp was one of the most popular anime series of 2018. Since then, the show has appeared on many Top Anime…lists from both critics and fans. No wonder then that the upcoming Season 2 is one of the most anticipated shows of 2021.

With fingers crossed, of course, that nothing major has been changed to spoil it.

As director Yoshiaki Kyougoku is returning for Season 2 as well, however, in all likelihood things should remain mostly the same. (continue reading below…)

Laid-Back Camp Season 2 is due to begin airing in Japan on January 7th at 11pm on Tokyo MX.

Crunchyroll streamed Season 1 of the hit series in the west, so it is likely Season 2 will show up there around the same time as well.

And, of course, if you have not yet had the pleasure of luxuriating in the adorable slice-of-life series Laid-Back Camp, be sure to binge Season 1 before the next one hits.

You can get started watching the first episode of the series below.