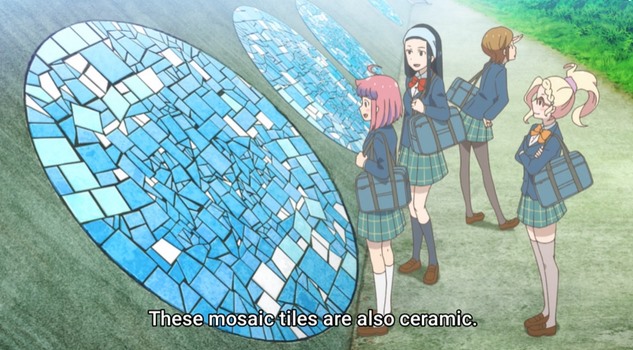 In Let’s Make a Mug Too Episode 2, “The Pottery Club is Paradise” it has been two weeks since Himeno started her new school, and she is now an official member of the pottery club.

But, once she sees the high level of pottery other members of the club submit to competitions, she already feels under pressure, wondering if she will be able to create beautiful pottery like that herself.

As she is worrying, Nao-chan appears in the school corridor, teases her about looking like a tanuki, and then says she will see her later as she is going to the Rescue Club.

Himeno is frustrated, as she wanted to ask Nao-chan’s advice about what design of pottery she should make, as Kukuri has told her “Just make what you like”. 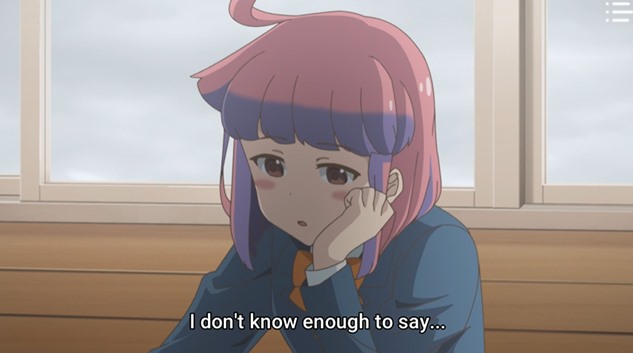 Not knowing what she likes, she sits at a pottery wheel feeling overwhelmed, looks around the pottery club house and realizes what a mess everything is in, so begins to clean.

Meanwhile, Himeno’s grandmother is worrying about her not being able to keep up with the other kids in the pottery club. After all, as she remarks to Himeno’s father, “The kids here start shaping dirt into pottery in kindergarten”.

But her father has faith in Himeno and calls her “bold”, but says he worries more about her being clumsy than anything else. 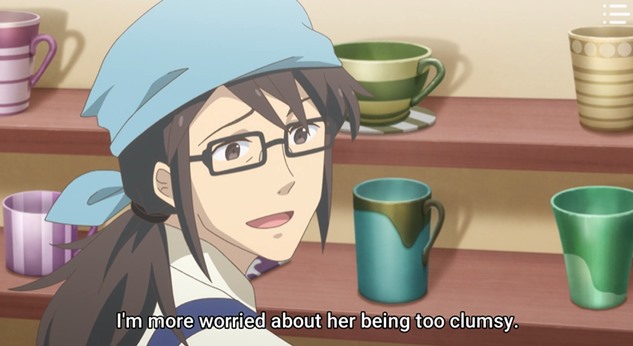 Back at the club house and Himeno is tidying the room but, being clumsy, manages to drop a mug right as Touko and Kukuri arrive. Himeno rushes to pick up the mug and apologizes for ‘damaging it’.

Touko and Kukuri laugh and explain the missing part at the bottom of the cup is on ‘the koudai’ or foot, and is meant to look like that. They then show her all the different types of feet a mug can have when it is finished.

But, when Himeno says the “Mino ware” has many different kinds, Touko and Kukuri look shocked and quickly inform her the pieces they showed her are not Mino ware, but are from different places around Japan instead.

Kukuri then realizes there is an easy way to show Himeno where different Japanese pottery is made, so she draws a huge map of Japan and tells her they can place all the pottery in the room on the map so Himeno will know where it originated.

At this point, Nao-chan appears and Himeno asks her how the Rescue Club went.

“Oh that”, says Nao-chan. “I’m only registered with them to give them the numbers they need”.

The girls then spend the next few minutes placing pottery all over Kukuri’s map, and it turns out Nao-chan knows a lot about Japanese pottery. Himeno, on the other hand, hardly knows anything. 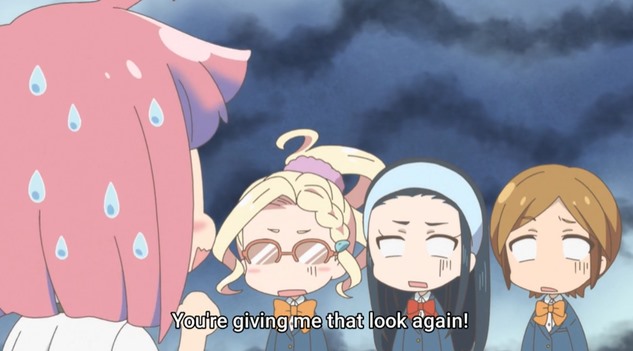 After club, the girls go for a walk to the town’s ice cream shop and stop along the way so they can show Himeno all the different ways ceramic is used around town. After all, Tajimi is known as a pottery town, so there are ceramics everywhere.

As they examine a pair of pottery statues, however, Mika climbs onto one of them for a closer look and falls into the pool behind. Touko offers to take Mika home so she can get dry, and Nao and Himeno head off to the ice cream shop alone.

When Himeno arrives home, her teacher is sitting in the coffee shop enjoying a cup of her father’s coffee, which she says has the perfect flavor.

She then tells her she was going to buy a ‘coffee card’, as every cafe in the Tajimi area has them so you can pre-pay for your coffees, but then she found out Himeno’s father’s cafe didn’t offer one.

Let’s Make a Mug Too Episode 1 ‘Welcome to the Pottery Club!’ recap — Himeno learns her mother is famous

“No worries, says her grandmother, “we will just print them out from the computer”.

Himeno’s teacher then tells her she is the advisor for the pottery club, which Himeno did not know.

Himeno then confesses, while she was nervous earlier on in the day when she thought about making pottery, now she knows there are all kinds of pottery, she isn’t nervous any longer.

She then tells her father Nao told her she looks like a tanuki. Her father laughs and calls her ‘The Tanuki of Tajimi’, which Himeno herself loves.

Watch Let’s Make a Mug Too Episode 2 on Crunchyroll, with the third episode in the series streaming soon.