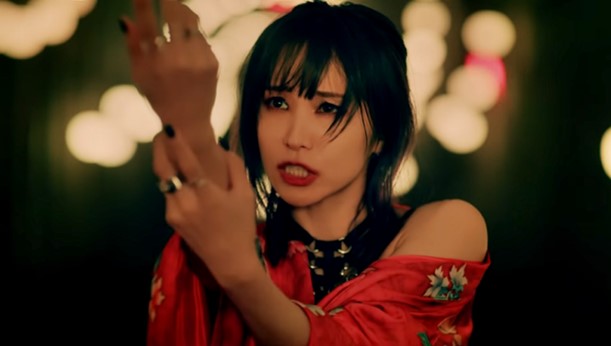 The Demon Slayer: Kimetsu no Yaiba Mugen Train Arc opening theme song ‘Akeboshi‘ by LiSA is looking like it could earn itself some of the popularity the Japanese singer’s last Demon Slayer theme song ‘Homura‘ also earned.

A song that recently caused LiSA to become Japan’s first female artist to have a song streamed more than 300 times.

I say this as, just taking a quick look at LiSA’s official YouTube channel this morning, ‘Akeboshi‘ has already been played almost 1.6 million times and counting — and it’s just over 24 hours since its release.

But, while still a fabulous song, ‘Akeboshi‘ isn’t as catchy melody-wise or beautiful a song as ‘Homura‘, however, so it still may fall short.

In keeping with the theme of Demon Slayer: Kimetsu no Yaiba Mugen Train Arc LiSA’s ‘Akeboshi‘ music video takes place in a railway tunnel, with the singer singing and dancing on the train rails.

The video was directed by Masakazu Fukatsu, the same director who also created LiSA’s ‘Homura‘ video, which currently has more than 228 million views on YouTube.

Related: Watch LiSA give an amazing live performance of ‘Homura‘

An amazing feat for a Japanese singer, but also very well deserved.

LiSA’s ‘Akeboshi‘ will be officially released on CD on November 17th as part of a double-sided single, along with ‘Shirogane‘, which is the Demon Slayer: Kimetsu no Yaiba Mugen Train Arc ending theme.

And, yep, with those two tracks together, that is bound to be a huge hit.

Meanwhile, the digital version is already out and stream-able on Spotify. Listen to that below, as well as watch LiSA’s ‘Akeboshi‘ music video.