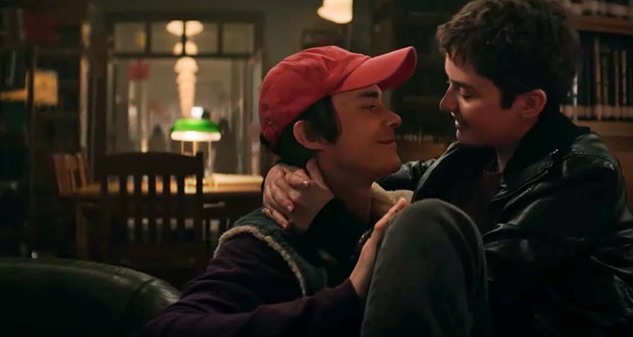 The song was played as Theo and Robin are talking about him needing to go back to the Fay realm with the hobgoblins. Otherwise, he will just continue to weaken.


Aimee deBeer’s ‘Heavy is the Hollow of a Mortal Soul‘ is from the now Los Angeles-based singer’s six-track EP Who Will Save the Universe, which was released in 2019.

The mystical-sounding song, and deBeer’s ethereal vocals, added a sweetness and a sadness to that extremely emotional Chilling Adventures scene.

DeBeer herself has been taking piano and voice lessons since she was nine-years-old and living in the United States.

She started university at the young age of just 16, and also began opera training at the same time. Training that has definitely helped her voice become as light and almost spiritual as it is now. (continue reading and listen to Aimee deBeer’s ‘Heavy is the Hollow of a Mortal Soul’ after the promo…)

Listen to Coyle Girelli’s ‘Something Strange in the Night’ from Chilling Adventures of Sabrina, Season 4, Ep. 3

After university, deBeer moved to New York City where she decided to pursue a music career.

With her song ‘Heavy is the Hollow of a Mortal Soul’ now being her first work licensed for a hit TV series, it is highly likely that career will become even bigger.

Listen to Aimee deBeer’s ‘Heavy is the Hollow of a Mortal Soul‘ as heard on Chilling Adventures of Sabrina on the singer’s EP Who Will Save the Universe in the Spotify player below.

You can watch the final season of the show (and every other season) on Netflix.