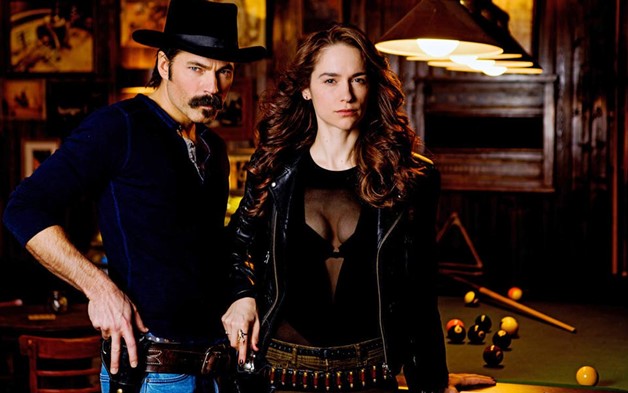 The dark fantasy series Wynonna Earp is back for its fourth season this week and, along with the usual battling revenants, the series is continuing on with featuring exceptionally good music on its soundtrack.

Music like Dead Posey’s ‘Don’t Stop the Devil‘, which showed up on last night’s episode of the supernatural show — Wynonna Earp, Season 4, Episode 1, “On the Road Again“.

The track was heard right at the beginning of the episode as Wynonna is getting all her guns and other weapons ready for the coming fight.

Dead Posey’s ‘Don’t Stop the Devil‘ is from the Los Angeles-based band’s five-track debut EP Freak Show, which was released in 2018 on the Sumerian Records label.

The track is not the first song Dead Posey has had featured on a hit TV series, however, as their music has also shown up on Lucifer,  Jack Whitehall – Travels With My Father, Marvel’s Cloak & Dagger and Teen Wolf.

Listen to Dead Posey’s ‘Don’t Stop the Devil‘ in the video below. You can also hear their debut EP in full in the Spotify player below that.

Wynonna Earp kicked off the first episode of its fourth season last night on CTV Sci-Fi Channel. This season will be different, however, as filming of the fourth season had to be suspended in March in Canada due to a ban on all filming because of the coronavirus panic.

That means the first six episodes of season four will be aired, then there will be a break for a few weeks until the last six episodes have been filmed and are ready to be watched.