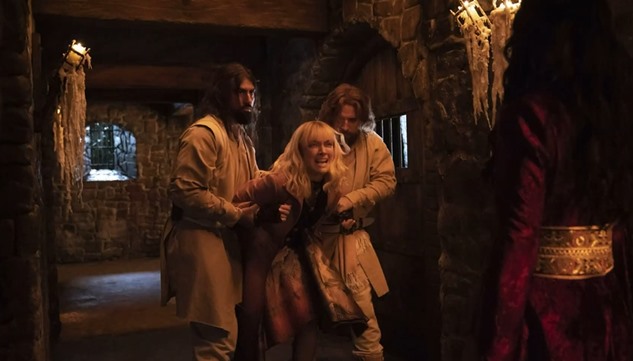 British singer, songwriter and actress Gabrielle Aplin’s ‘Run for Cover‘ was heard on the soundtrack of Batwoman this week — Batwoman, Season 2, Episode 8, “Survived Much Worse“.

A show that has disintegrated into new depths of awfulness in Season 2 unfortunately.

The song was played as Alice sets Coryana’s Desert Rose crops on fire.

Aplin’s ‘Run for Cover‘ is from Miss You — the English indie singer’s fifth EP.

The four-track EP was released in 2016 via her own label Never Fade Records, and also spawned a single of the same name.

Aplin herself got her original start on YouTube where she amassed a huge number of video views and fans over just a few years.  That eventually brought her to the attention of Parlophone Records with whom she signed a record deal in 2012.

Since then, the Wiltshire native has released three albums, three live albums, seven EPs and a number of singles, most of which were released via her own label.

Gabrielle Aplin’s ‘Run for Cover‘ was also first featured on the trailer for the video game A Plague Tale a couple of years before it was licensed for Batwoman.

It is also one of many songs Aplin has had licensed for hit shows in the last few years, including songs played on The Royals, Mary Kills People, Wentworth, The Vampire Diaries, Chicago Med, Made in Chelsea, Reign, Teen Wolf and Skins (UK).

Listen to Gabrielle Aplin’s ‘Run for Cover‘ as heard on last night’s Batwoman in the audio video below, and on her EP Miss You.

There is also an excellent Mahogany Session live version of the track Aplin performed in 2017 that gives this gorgeous song a whole extra level, considering the singer and her velvet vocals are accompanied with her own guitar and backed by a string trio.

Batwoman is now airing on The CW.