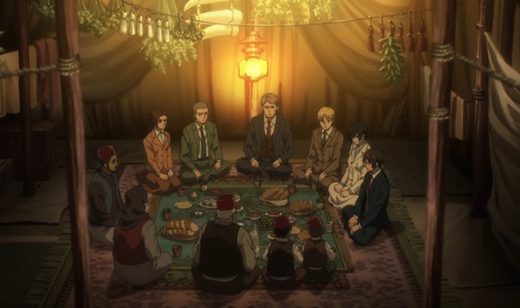 One of the many wonderful things about the anime Attack on Titan is the soundtrack of each season.

Take Hiroyuki Sawano’s ‘Len Zo 97N10 Hi Kyosetsu Mahle‘, that lovely instrumental piece that was played on the final episode of the final season of Attack on Titan — Attack on Titan, Season 4, Episode 28, “The Dawn of Humanity” — as everyone is enjoying themselves at the party in the tent.

That piece begins quietly and elegantly, and then changes into a more joyous piece, which illustrated perfectly that scene as everyone is happy at just being together.

RELATED: Attack on Titan‘s ‘Call of Silence‘ is beautiful — Listen

Right before, of course, we all know everything is likely to go to hell in a hand basket.

Listen to Hiroyuki Sawano’s ‘Len Zo 97N10 Hi Kyosetsu Mahle‘ from Attack on Titan, Season 4 in the video, and on the Attack on Titan Season 3 soundtrack below as, of course, the track was also played during that season.