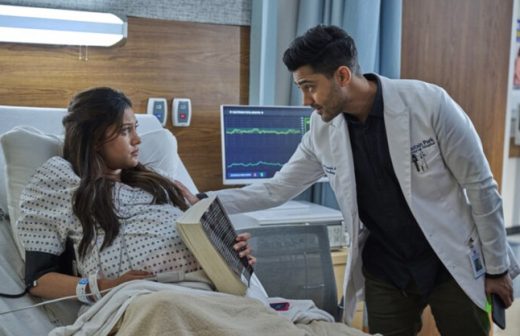 The song was heard as Ian is in the ICU checking on the twins, and AJ holds them.


Khalid’s ‘Angels‘ is one of the tracks from the singer’s debut studio album American Teen. That album was released on the Right Hand and RCA labels in March, 2017, and was so successful for the then still teen singer it was nominated for two Grammy Awards.

American Teen also charted in 13 countries, including the United States.

In the U.S., it was ultimately certified 4 x Platinum after making it to #4 on the Billboard 200 chart, and to #3 on the Hip Hop/R&B Albums chart.

Two singles from the album — ‘Location‘ and ‘Young, Dumb & Broke’ also made it into the Top 20, putting the young singer on the music map and earning him enormous attention from music executives, critics and fans alike.

Attention that quickly skyrocketed him to his current superstar status.

Listen to Khalid’s ‘Angels‘ as played on The Resident last night on the singer’s American Teen album, and in the singer’s official lyric video for the track.

Watch the latest season of The Resident on FOX news.