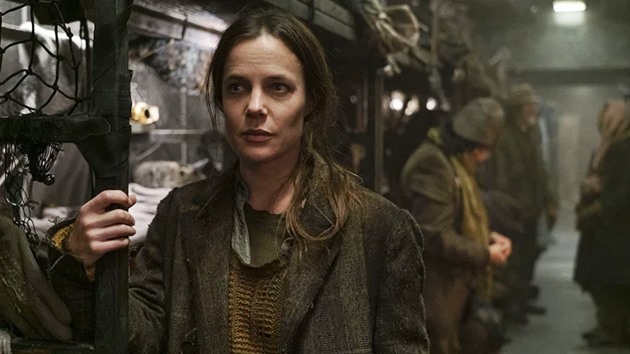 The TNT post-apocalyptic dystopian thriller drama series Snowpiercer continued its superb soundtrack this week with TR/ST’s ‘Colossal‘, which was featured on Snowpiercer, Season 1, Episode 7, “The Universe is Indifferent“.

The futuristic experimental music track was the music playing as the camera moved through the club car and on into a secret back room meeting.

The song was the fifth single released from the Canadian electronic music project’s third studio album The Destroyer (Part I).

Released in April, 2019 via the indie label Royal Mountain Records, the album was the first part of a two-part album series; the second part being unveiled later in the year.

The eight-track album was received well by most critics and spawned a European tour that hit many of Europe’s main cities as well as a short North American tour that culminated in Austin, Texas with a performance at the Austin Terror Fest.

TR/ST’s ‘Colossal’ was a collaboration with Canadian producer Maya Postepski and has been described as a somber dance track that is dark, sorrowful and even ‘perfect for vampires’.

As for Snowpiercer, there are three more episodes of the first season to air on TNT in the coming weeks. The popular series has already been renewed for a second season.

Related: Boards of Canada’s mesmerizing ‘Slow This Bird Down‘ added mystery and eeriness to Snowpiercer