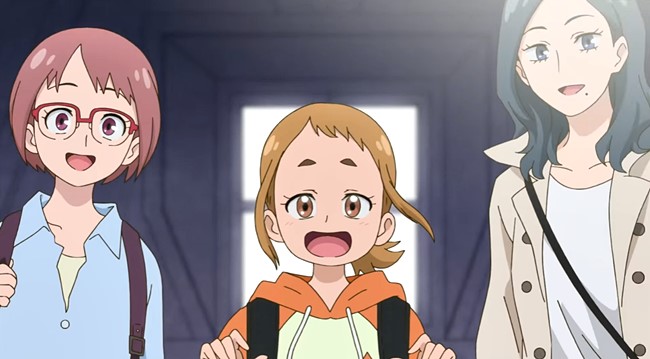 The upcoming release of the film Looking for Magical Doremi will probably be the highlight of my year. After all, I have watched every episode of every series of the Ojamajo Doremi franchise at least three times over in the last few years.

Because, come on, when it comes to magical girl series, Ojamajo Doremi just got it so incredibly right in every single way.

That’s why I was thrilled to see today’s release of the Looking for Magical Doremi final trailer. A trailer that features the original Ojamajo Doremi opening theme song ‘Ojamajo Carnival!‘.

A theme song that brings back so many lovely memories.

The Looking for Magical Doremi final trailer also heralds the upcoming release of the full-length anime film (finally!), which has been created to help commemorate the 20th anniversary of Ojamajo Doremi.

A film with an even more unusual storyline than we are used to as, this time, it features three adults — Sora Nagase, Mire Yoshigaki, and Reika Kawatani.

Mire an office worker, Sora a student who wants to become a teacher and Reikia a part-time freelancer and store clerk.

Although all these young women are from completely different backgrounds and different lives, soon they are drawn together by a magic gem. A gem that sends them off on an incredible adventure.

Junichi Sato, the series director of Ojamajo Doremi, is returning to direct the movie along with Yu Kamatani. Yoshihiko Umakoshi is chief animation director (and yes, this film looks gorgeous), as well as script writer and character designer. (article continues below…)

Is the Order a Rabbit? BLOOM’s Chiya Ujimatsu’s character video shows off our lovely girl

From the few scenes released so far as well, it looks like the movie features the same charm and craziness as the original anime series.

Looking for Magical Doremi will open in movie theaters on November 13th.

Until then, check out the Looking for Magical Doremi final trailer below and do notice that beautiful artwork and lovely animation. Oh yes, this one is a definite must see.