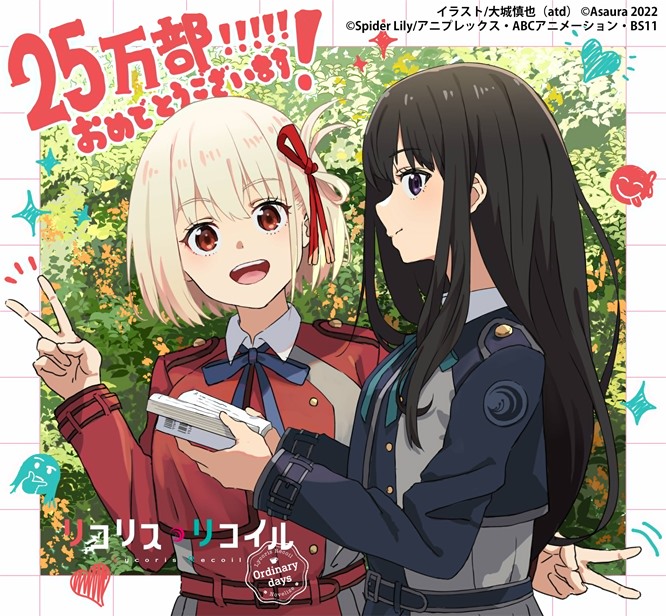 The Lycoris Recoil spin-off novel Lycoris Recoil: Ordinary Days written by Asaura and illustrated by Imigimuru was so successful when it was published back in early September, the book was given a second printing even before its release due to all the pre-orders it earned.

Now, with more than 250,000 copies of Lycoris Recoil: Ordinary Days already sold, the creators are so happy about its success, anime series designer Shinya Oshiro has released a visual in celebration.


The cute Lycoris Recoil: Ordinary Days visual was released on the anime’s official Twitter account earlier today, with the message that the 7th printing of the novel has already gone ahead.

Known as リコリス・リコイル Ordinary days in Japanese, the novel came out under the Dengeki Bunko publishing imprint.

The Lycoris Recoil anime series was produced by A-1 Pictures and premiered on July 2nd, 2022, with the last episode airing on September 24th.

It was directed by Shingo Adachi in his directorial debut, and starred Shion Wakayama as Takina Inoue, and Chika Anzai as Chisato Nishikigi.

A second season of the anime has not yet been confirmed but, with the enormous popularity of Season 1, it is very likely it will eventually be forthcoming.

RELATED: The relative newcomer who voices Lycoris Recoil’s Takina Inoue is awesome in the role