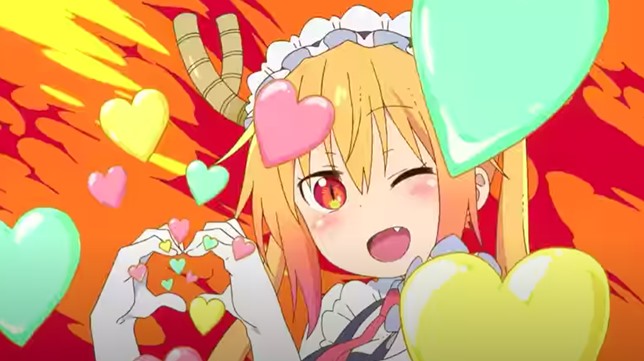 From the just released Miss Kobayashi’s Dragon Maid S trailer, it also looks like Iruru might be more than just a handful as, from these few clips alone, she seems to have a bit of an attitude.

And, while Miss Kobayashi’s Dragon Maid S was meant to be directed by Yasuhiro Takemoto, director of the first season of the series, sadly he was one of the 36 people that lost their lives in the Kyoto Animation arson attack in July, 2019.

In honor of the late extremely talented director, however, KyoAni has posthumously promoted him to series director for this second season. What a lovely, and deserving, sentiment is that?

The new director for season 2 is Tatsuya Ishihara (Sound! Euphonium), while Shoko Ochiai has been named as art director in the place of Mikiko Watanabe (Violet Evergarden, Amagi Brilliant Park, Miss Kobayashi’s Dragon Maid) who was also one of those tragically killed in the arson attack.

Returning staff include Miku Kadowaki as character designer, Yuka Yamada as series composer, Nobuaki Maruki as chief animation director and Yota Tsuruoka who is in charge of sound direction.

Miss Kobayashi’s Dragon Maid S will premiere in July, 2021 and, as Crunchyroll streamed the first season of the show, it is likely that’s where we will get to see the next one. Fingers crossed!

Until then, watch the just released and adorably cute Miss Kobayashi’s Dragon Maid S trailer below (come on, they’re rapping!!), and keep up-to-date on more news about the upcoming anime on its official website.