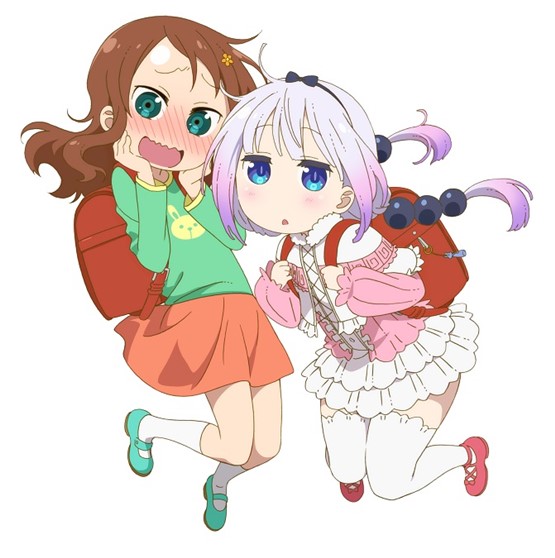 With the premiere of the long-awaited Miss Kobayashi’s Dragon Maid S anime series premiere coming ever closer, the second of five character visuals was released yesterday via Twitter.

It’s not surprising both of these young characters are featured on the visual either, as Kanna has got to be one of the most popular characters in anime at the moment and, once Riko proved she had a huge crush on Kanna, she became a fan favorite too.

(And if you haven’t figured out just how adorable Kanna is, do watch her doing her ‘ame ame’ rain dance).

The second Miss Kobayashi’s Dragon Maid S visual shows chubby-legged Kanna in her famous ruffled white skirt looking as sweet as usual, and Riko blushing as she remembers just how much she loves her.

The upcoming anime is produced by Kyoto Animation and is based on the manga by Coolkyousinnjya. The series is being directed by Tatsuya Ishihara, who has taken on the director’s role after the tragic death of Season 1 director Yasuhiro Takemoto in the KyoAni arson attack.

Miss Kobayashi’s Dragon Maid S will premiere in Japan in July, 2021 and will stream on Crunchyroll at the same time.

Until then, check out the adorable Kanna and Riko visual above, view the first visual featuring Tohru and Kobayashi on Leo Sigh here, and stay tuned for visual #3 expected to be released soon.