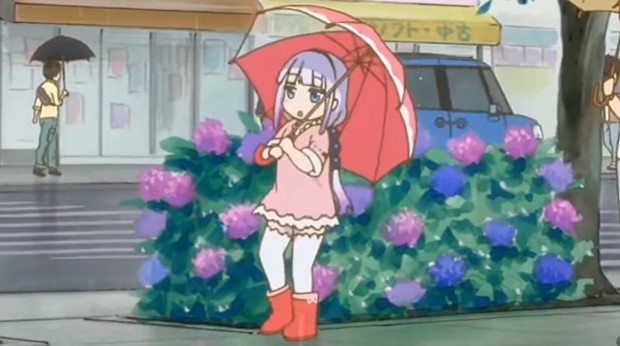 One of the best girls in all of anime-dom is Miss Kobayashi’s Dragon Maid‘s Kanna Kamui — the much older than she looks and behaves dragon who was exiled from the dragon realm for being too much of a prankster.

Nowadays, she lives as her human form with Miss Kobayashi and her dragon maid Tohru. As she is really only the equivalent age of a primary school student in the dragon world, she is just as adorable as one in ours.

And, to show just how much I adore Kanna, I will admit I recently watched her say ‘Ame Ame Ame’ (rain, rain, rain) while marching in the rain clutching a red umbrella repeatedly for more than 20 minutes.

Weeeellllll….there is a video that has Miss Kobayashi’s Dragon Maid Kanna repeating ‘Ame Ame Ame’ for more than 10 hours. And, it’s apparently not just me that loves it, as the video itself has more than 1.2 million views.

If that is not enough for you to think I am absolutely nuts, it gets worse.

Because I recently discovered an awesome remix version of Kanna’s ‘Ame Ame Ame‘ created by a Malaysian remixer and anime fan, that is even cooler as, that one, you can even dance to.

You can watch that gorgeousness below too.

As for the anime series, head over to watch Miss Kobayashi’s Dragon Maid on Crunchyroll and luxuriate in the moe perfection that is Kanna.