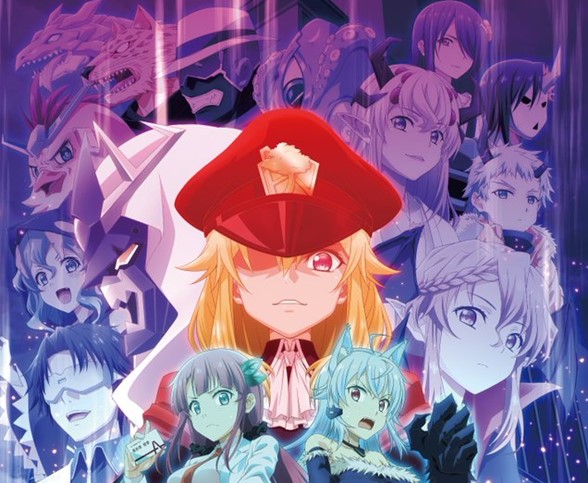 One of the anime on my list to be sure to watch early next year is Miss Kuroitsu from The Monster Development Department. I love anime featuring cute girls, and this one seems to have a ton.

Girls that showed up on the new Miss Kuroitsu from The Monster Development Department key visual just released today.

An adorable visual featuring main girl Touka Kuroitsu and co-worker Wolf Bate, as they both look outraged that they are being towered over by the person they hate the most — Blader, the God of Swords.

Yeah, I know. Seriously outraged, but still so so adorable.

The new Miss Kuroitsu from The Monster Development Department key visual was drawn by the show’s character designer Kazuya Morimae, who is branching out into character design after being Chief Animator or Key Animator on a ton of shows including Golden Time, Hybrid x Heart Magias Academy Ataraxia, and Love, Election and Chocolate.

All I can say is if Kazuya Morimae’s character designs for Miss Kuroitsu from The Monster Development Department are as gorgeous as the work that has been released so far, (watch the show’s PV trailer below) that was a career move in the right direction.

Check out the new, and utterly adorable, Miss Kuroitsu from The Monster Development Department key visual above.

The anime series itself will premiere in Japan in early January, 2022. We should get it around the same time.