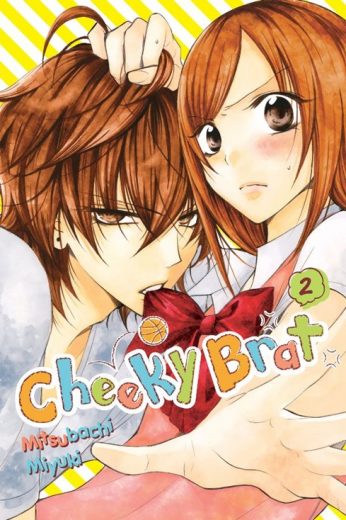 I must admit, I grabbed the first volume of Mitsubachi Miyuki’s manga series Cheeky Brat late last year simply because I liked the cover and the art style.

It was the story, though, that kept me enthralled as it really is cute as it follows Yuki, high school basketball team manager and would-be girlfriend of team captain Kido.


Until she finds out he has a girlfriend that is.

But, not that that event leaves her alone and crying for long.

Oh no, because suddenly playboy Naruse seems to have attached himself to her and, boy, is he a pain.

Now this month, Cheeky Brat Volume 2 is already out and, by the sounds of the description, Yuki is feeling a bit more for Naruse than she probably should. Whoops!:

I, Yuki, have no intention of admitting it. Never. The last thing I will ever do is plead guilty to the crime of maybe possibly having a soft spot for my cheeky playboy of an underclassman—who’s an absolute brat—Naruse.

Speaking of which, instead of focusing on his strange grade school rivalry with this Shizuka guy, he needs to get his head in the game and focus on our qualifiers…!! Maybe I was expecting too much from him, after all…

And yep, I’ve already grabbed it and, from the first few pages so far, it’s as cute as the first one.