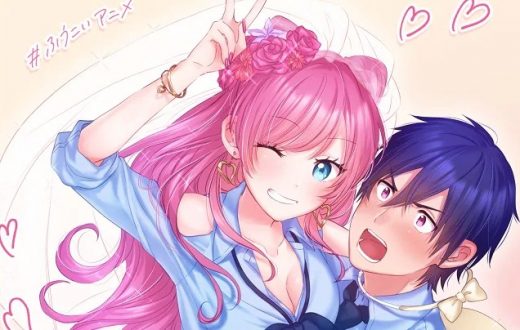 Anime being a visual medium, obviously the art style and color palette often has a lot to do with whether an anime series is a big hit or a bit of a flop.

That is why I am predicting the upcoming More Than a Married Couple, But Not Lovers anime is likely to at least grab a huge number of anime fans’ interest when it premieres.


After all, the just released second More Than a Married Couple, But Not Lovers key visual featuring protagonists Jirō and Akari is gorgeous.

Especially when it comes to its vibrant color palette.

In the visual, Akari, being a gyaru, is portrayed with long pink hair that just pops off the screen while Jirō, with his more staid appearance but still-purple hair is a beautiful compliment to her.

Yep, this one has already gone on my ‘must watch’ list, primarily because the colors used for the pair are so interesting.

The More Than a Married Couple, But Not Lovers anime (aka 夫婦以上、恋人未満。in Japanese) is based on the manga by Fūfu Ijō and Koibito Miman, and tells the story of third-year high school students — Jirō Yakuin and Akari Watanabe.

A couple paired together during their class ‘marriage training project’. A project that has each pair practicing like a married couple, so they can learn what it will be like when they graduate high school and eventually get married themselves.

The problem with this pairing is Jirō is quite straight-laced, while Akari is a flamboyant gyaru. On top of that, both of them have crushes on other students in their class.

Will the strange pair be able to work well enough together so they are allowed to change partners and end up with the people they would really like to be married to, or will they find themselves not hating each other as much as they thought?

More Than a Married Couple, But Not Lovers is being directed by Junichi Yamamoto (Monster Girl Doctor), with the guidance of chief director Takao Kato (To Love-Ru).

Naruhisa Arakawa (Kingdom) is in charge of scripts, and Chizuru Kobayashi (Pandora Hearts) is the show’s character designer.

Studio Mother is in charge of anime production.

No word yet on when More Than a Married Couple, But Not Lovers will premiere, but I’m keeping my eye out as this one sounds fun, and looks cool.