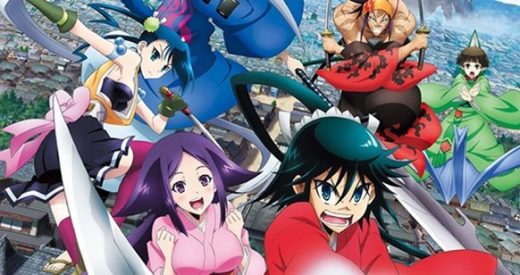 
The release is only a Japanese with English subtitles release, ie: no English dub included, and it does not include the three OVAs that came out in 2014 and 2015.

They are available in a second Blu-ray release.

Running time is 650 minutes, so there’s a heckuva lot of samurai action against those massive Mushi insects to look forward to if you grab it.

Mushibugyo is based on the manga series written and illustrated by Hiroshi Fukuda, and originally aired in 2013.

It was directed by Takayuki Hamana, with anime production by Seven Arcs Pictures.

Sentai Filmworks has this to say about the Mushibugyo plot:

Cleaving insects in flight with one’s sword was once an impressive display of samurai skill, but since Japan was invaded by the bug-monsters known as the Mushi, it’s impressive just to survive a battle with one. That’s the task of the Mushibugyo, the warriors who specialize in fighting the insect scourge, and to erase a stain he brought upon his family’s honor, young Jinbei Tsukishima is determined to join their ranks.

It won’t be easy, and the young swordsman has his work cut out for him impressing a team that includes a female ninja with a knack for explosives, a master of shikigami magic, and a roster of other powerful fighters. On the other hand, a certain beautiful and well endowed innkeeper he rescues quickly becomes a fan, so at least there are some perks to becoming a MUSHIBUGYO.

The Mushibugyo TV Collection Blu-ray is now available at Sentai Filmworks for $48.99.