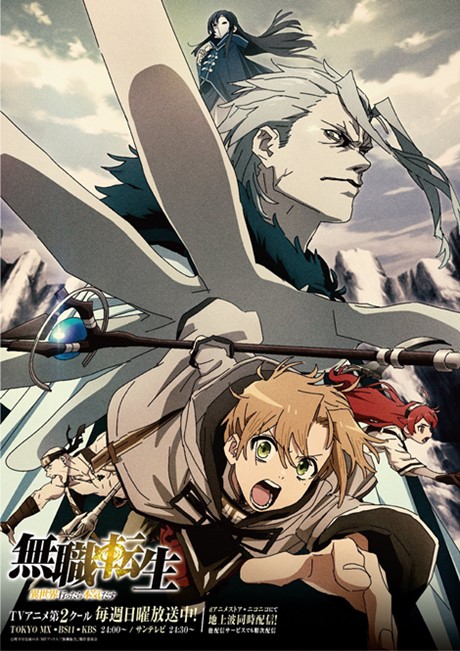 The Mushoku Tensei: Jobless Reincarnation anime has been one of the surprise hits of the year, with current ratings on My Anime List at 8.35.

A very high score from fans who are more likely to hate an anime than love it, and one especially surprising when you consider a few narrow-minded viewers criticized the show due to Rudy being a bit ‘perverted’.

(Is it just me, or do you too feel like it would be nice if those who are that narrow-minded simply decide not to watch the anime rather than try to insist Japanese companies change what they like to create, just because a tiny minority in the west are ‘offended’ by it. Just sayin‘)

Fans, then, will be thrilled to see a new Mushoku Tensei: Jobless Reincarnation key visual out today on the anime’s official Twitter page .

A high-energy Mushoku Tensei: Jobless Reincarnation key visual showing Rudy, Eris and Ruijerd getting involved with a powerful new enemy, and not coming off so good.

The Mushoku Tensei: Jobless Reincarnation key visual has been released to help promote the second part of the anime series.

A second part fans seem to be loving just as much as the first, and a key visual that joins a group of previously released visuals that really are beautifully drawn.

Funimation is currently streaming the second part of the anime, along with the first, in both English sub and dub versions.

When a 34-year-old underachiever gets run over by a truck, his story doesn’t end there. Reincarnated in a new world as an infant, Rudy will seize every opportunity to live the life he’s always wanted.

Armed with new friends, some freshly acquired magical abilities, and the courage to do the things he’s always dreamed of, he’s embarking on an epic adventure—with all of his past experience intact!