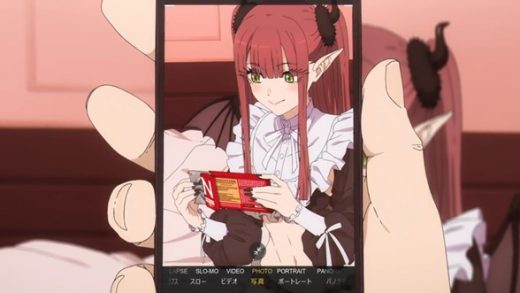 With the premiere of My Dress-Up Darling Episode 11 tonight, we are just one episode away from the ending of this best rom-com of Winter 2022.

At least for this season.

Meanwhile, of course, everyone watching it is dying to know if Marin and Gojou realize each loves the other, and so one or both of them end up confessing?

This My Dress-Up Darling Episode 11 review will tell you if that happened in this episode so, if you haven’t yet watched it, you may want to hold off reading this until you have.

My Dress-Up Darling, Episode 11 review — “I Am Currently at a Love Hotel“

Episode 11 begins with the pair at a manga cafe cooling off from the heat, and Gojou freaking out as he is alone in a booth with Marin.

Marin then shows him a manga she likes, and talks about wanting to cosplay as the succubus character Liz-kyun, but thinks the girl’s half-pigtails won’t suit her.

Gojou is amazed, and tells her the pigtails would look perfect on her, which embarrasses Marin.

But, it’s soon Gojou’s turn to be embarrassed when Marin explains what a succubus is. And how ‘pervy’ they are.

And it’s now you have to remember neither Marin nor Gojou know the other one likes them. Even though they have both come to the conclusion that they are in love with the other.

Well, they are teenagers, and confessions can be traumatic, right? Especially for someone like Gojou, who didn’t even have friends until he met Marin.

And for someone like Marin, who is so cute she is used to boys asking her out, and not the other way around.

Let’s face it too, Gojou isn’t likely to ask Marin out. He doesn’t have the confidence and, in his wildest dreams, would never think she likes him as much as he likes her.

So, will it be Marin who eventually confesses to Gojou, and not the other way around?

Until that happens, the writer won’t let us  spend 24 minutes just watching Marin and Gojou enjoy themselves, as at least one of them needs to be having a freak out at any given moment, right?

This happens in spades in Episode 11, with Gojou looking like his brain will explode for at half of the episode, while Marin is at one minute oblivious to Gojou’s naive yet still oversexed teen self, and in the next as oversexed as he is.

The first freak out happens about 8 1/2 minutes in when we suddenly go from Marin and Gojou at a manga cafe to being in a love hotel.

Come on, it’s way more innocent than it sounds. Isn’t it?

Especially because Marin bought a swimsuit she thinks looks like Liz-kyun’s outfit, and then asks Gojou if he will go with her to ‘a studio’ to take photographs.

That studio turns out to be a love hotel, which has a perfect room and a perfect bed for photographs of Liz-kyun — the succubus who is trying to make a light novel writer fall asleep so she can steal something of his. (Watch the anime to find out what! 🙂  )

Which is when Gojou first looks like he’s having a heart attack. “A love hotel? What? What?”

And that’s when my mind went to “What the hell will Gojou do if Marin ever kisses him?” Probably keel right over in shock.

Because just the thought of being close to her causes his brain to overheat, and being in a love hotel almost finishes him off.

Marin gets him calmed down though by emerging from the bathroom wearing the Liz-kyun cosplay costume Gojou has made, and the two discuss why it looks so cute.

RELATED: When in the My Dress-Up Darling manga does Marin tell Gojou she loves him?

They then take photos based on the Liz-kyun manga, until they finally end up in a compromising position on the bed as Gojou takes one more photograph.

And then they hear the sounds of a couple next door having sex.

Which…. of course, leads to the funniest scene in My Dress-Up Darling yet and… the most risqué.

Although, like everything in this wonderful anime, while there’s definitely risqué fan service in most episodes, it still remains quite innocent.

But… you will have to watch My Dress-Up Darling, Episode 11, “I am Currently at a Love Hotel” to find out what transpires when they are on the bed together.

You can do that on Crunchyroll.

And now there is just one episode to come of My Dress-Up Darling Season 1, and neither has confessed to the other, nobody has kissed anyone, and nobody has said “I love you”.

Whether we will get that at all in this first season though is entirely up to the writer, and to how much of the original manga was followed.

After all, Marin does tell Gojou she loves him at one point in the manga, but whether we will see that this season is anyone’s guess.

For my guess, I think it may be the final scene in Episode 12, as you just know this thing will end on a cliffhanger.

Meanwhile, just enjoy how beautifully written this entire anime is, but especially how perfectly written was that last scene on the bed in tonight’s episode.

As I haven’t laughed as much at anything else in this hilarious anime as I laughed at that.

You’ll find more reviews of earlier episodes of My Dress-Up Darling, plus other information about the anime, here on Leo Sigh.