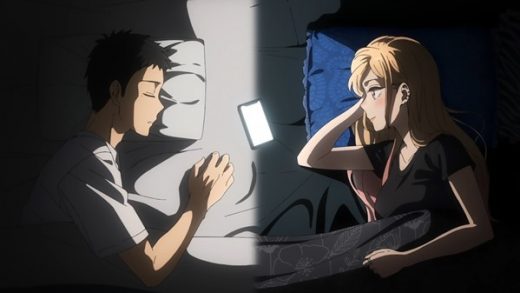 And, damn, just like that, Season 1 of My Dress-Up Darling came to an end today, with Episode 12 ending with exactly the scene I predicted it would. (Yep, I’ve read the manga)

Not to worry, though, as I have a strong feeling we will soon get an announcement for a Season 2, as this rom com has been one of the most popular anime of the Winter 2022 season.


So, onwards and upwards, and let’s do a My Dress-Up Darling, Episode 12 review as, even if this wonderful anime has now ended, the show’s final episode was ‘almost’ satisfying overall.

Episode 12 was one of the most relaxing episodes of the entire anime, with Marin and Gojou not doing much of anything except spending time together and having fun.

Fireworks are the name of the game this week, as it is summer vacation and Marin decides she wants to go to a local festival.

But, unfortunately for Marin, her dad won’t let her go until she finishes all her summer homework.

That leads her to message Gojou saying “Help me”, and he is soon over at Marin’s apartment helping her get through all the homework she should have done weeks before.

Eventually the pair are watching horror movies with Gojou asking “Aren’t they scary?”, and Marin saying “No, of course not”.

Of course, by the end, Marin is terrified, while Gojou is calmly rewinding the film to see how all those cool special effects were done.

And this is what I have loved about so much of this wonderful anime, as it has often seemed as though Marin is both the strongest of the two and also the one who always leads.

In reality, however, just like in this scene, Gojou is actually far more emotionally resilient than he looks and, during some of the most important moments, really quite chill.

Marin, being the somewhat flighty person she can often be, needs someone like that to keep her grounded.

Gojou is that person every time.

The following day the pair head to school to pick up Marin’s math homework, which leads them to check out the school swimming pool as it’s such a hot afternoon.

Marin decides to poke her toe in the water, but somehow manages to fall in fully clothed.

RELATED: In which chapter of the My Dress-Up Darling manga does Marin tell Gojou she’s in love with him?

After Gojou jumps in to save her and they are both dripping wet on the side of the pool, Marin confesses she can’t swim and really thought she was a goner.

Again, when it counts, Gojou is the strong one as he has no qualms about jumping in to rescue her.

Proving, yet again, while Marin may seem to be able to take care of herself, time after time she’d be in a helluva mess if Gojou wasn’t there to save her from herself.

He also proves, where Marin is concerned, both her safety and her happiness are his only concern. And hell, wouldn’t that make him the world’s best boyfriend, eh? And doesn’t she already know that?

The rest of the episode is made up of Marin and Gojou going to a summer festival, with Marin arriving wearing a yukata, and Gojou being so blown away by how beautiful she looks he can hardly speak.

Marin realizes Gojou has suddenly turned shy because of the way she looks, and her heart almost beats out of her chest she’s so happy.

As the fireworks start, Gojou is astounded by how beautiful they look as, always being alone before, he has never seen fireworks so close up. Until Marin catapulted into his life, that is, and he finally had someone who would go to a festival with him.

A scene that isn’t dealt with in a heavy-handed sob story way, like many writers would insist upon, but instead in a matter of fact way pointing out Gojou is happy now, rather than making us all pity him because of his past.

But, things get even better for Gojou soon after because, as he is carrying Marin home after her sandals rub sore spots on her feet, she tells him “Sorry, Gojou-kun. Next year, I promise I’ll be more careful”.

And Gojou realizes yet again, this isn’t just a “few months thing” between he and Marin, but that Marin is planning on them spending time together long into the future.

But… before you think My Dress-Up Darling, Episode 12 has ended on this happy note, keep watching through the sneaky ending theme song and end credits, as the most important scene of the entire anime is about to come up.

That happens when Marin calls Gojou terrified, as she has made the mistake of watching another horror movie alone. And now she can’t sleep.

So, she asks Gojou to talk to her over the phone until they both get tired.

But, as she hears Gojou’s breathing turn into the heavy breathing of sleep, she ends the story she was telling him and calmly says “Gojou-kun, I love you”.

Of course, he doesn’t hear her.

A lovely ending scene, and one that summed up the entire anime series so perfectly. 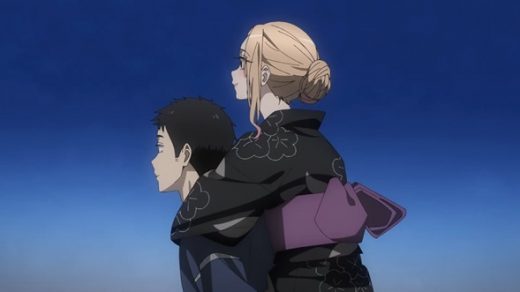 Because, right from the start, Marin was the girl who always said what she thought.

Whether it was “Please sew this dress for me”, or “Come to a cosplay event” to “You should never make fun of the things that people like” and, finally, “I love you”.

Gojou being who he currently is needed someone like that to sweetly, kindly but firmly pull him into their life, and allow him to experience all the things he wasn’t able to experience before, simply because he didn’t have any friends.

That it was Marin, the most popular girl in the school who then promptly fell in love with him, because he was just as kind and lovely as she was, made it even better.

And when you get right down to it, My Dress-Up Darling has been an anime all the way through that doesn’t feature high drama, tragic events, or nasty, rude people.

Hell, it didn’t even feature an ugly word between Marin and Gojou throughout all 12 episodes. No arguments, no fights, no stalking off pissed off at the other person either.

Instead, My Dress-Up Darling just calmly followed two nice people who quietly fell in love, while enjoying spending time together, and doing the things they love to do.

And, honestly, isn’t that how love should be in real life too?

My Dress-Up Darling, Episode 12, and all the other episodes, are now streaming via Crunchyroll.

Meanwhile, we’ll be sure to let you know if a Season 2 is greenlit but, if I was a betting girl, I would bet the house on it.

RELATED: A cute visual was just released to celebrate the final episode of My Dress-Up Darling — look!