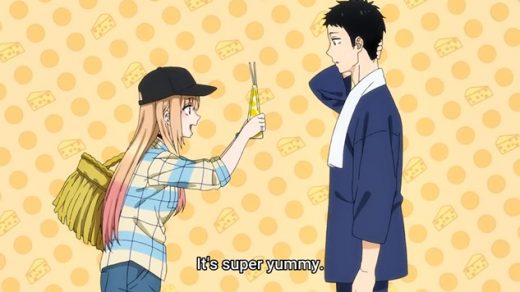 Like I mentioned in my original review of the first episode of My Dress-Up Darling (aka Sono Bisuku Dōru wa Koi o Suru), it was setting itself up to be one of the best anime of Winter 2022.

Now, after just finishing watching My Dress-Up Darling Episode 2, “Wanna Hurry Up and Do It?“, that seems to be pretty much a given. At least for me.


After all, with at least 15 anime series I’m watching during Winter 2022, no others have yet grabbed my interest as much as this one. Or made me laugh as much.

So, let’s take a look at My Dress-Up Darling, Episode 2, and see what happened in it to make me love the series even more.

My Dress-Up Darling, Episode 2, “Wanna Hurry Up and Do It?“

We left My Dress-Up Darling after the first episode with Gojou agreeing to make Marin’s cosplay costumes.

The problem starts in the first couple of minutes of Episode 2 when Gojou realizes he has no idea what Marin is talking about when she refers to a game she likes called Slippery Girls 2. A game with a character — Shizuku-tan –she wants to cosplay as, but needs him to make the costume.

As she explains the premise of Slippery Girls 2, though, Gojou is already wondering what the hell he let himself in for, as Marin explains the plot being about “a harem” and “humiliation”. 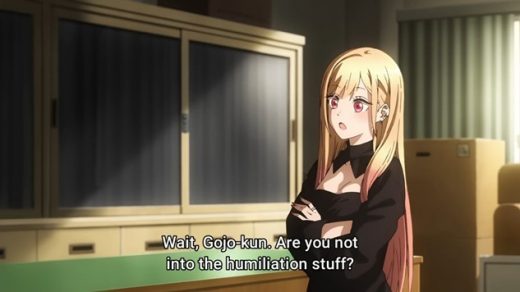 But, after Marin has told him why she loves the character of Shizuku-tan so much, and then said she should be allowed to like these types of games even if she is a girl because “it shouldn’t matter if you’re a boy or a girl if you like something, right?”, Gojou is suddenly completely on board.

After all, he was chastized by a girl when he was young for liking dolls, as she screamed at him “Boys aren’t supposed to like DOLLS!!!!!”.

Marin has also made sure Gojou can sew a cosplay outfit more easily, as she whips out of her bag a magazine called “A Beginner’s Guide to Making Cosplay Outfits“, and gives it to him. 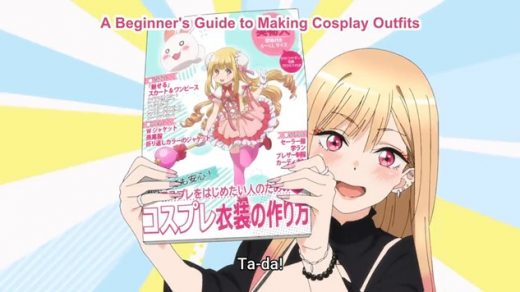 But when Gojou tells her it will have to wait until Monday before they can start on her Shizuku-tan costume, even though Marin says that’s okay, you kinda know it’s not.

So, really, was anyone surprised when she showed up on his doorstep first thing Saturday morning, clutching a bag of cheesecake and ready to get going on the costume making?

Of course, having Marin in his room is soon causing a problem for Gojou as, remember, he hasn’t ever really had any friends. Let alone a gorgeous girl suddenly arriving in his bedroom.

And once he knew she needs to be in her underwear for him to take her measurements, he’s freaked out even more. 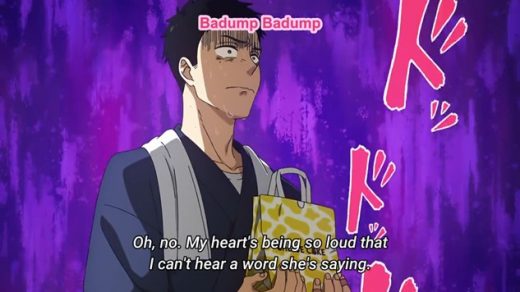 But Marin is in control of everything as usual, and is soon showing him she came fully prepared — in a bikini. Not that that helps Gojou calm down much, you understand.

Especially when he has to measure every one of Marin’s body parts, including her feet.

Then it’s time to measure her chest, and Gojou is now a lost cause. Sweating, shaking and frozen stiff like a popsicle, while Marin stands there as cool as a cucumber directing him.

But, just as Gojou is frantically wishing he could be just like Marin, with nothing affecting his composure, it comes to measuring her inseam.

As he reaches the measuring tape to the top of her thigh, he hears a small sound. And quickly realizes Marin just became as embarrassed as he was a few minutes before. 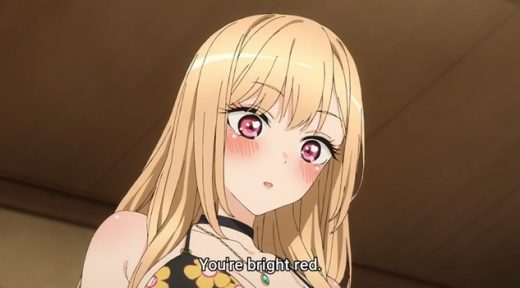 Soon the measurements are over, and the only thing left is for Gojou to know exactly what Shizuku-tan costume looks like, so he can figure out how to cut the dress pattern.

How will he find out?

By playing both the Slippery Girls games Marin has brought for him.

My Dress-Up Darling Episode 2 ends with Gojou intently playing the games when his grandfather arrives back from shopping for a new sewing machine.

The episode finishes with him wondering why his grandson is obviously playing a certain type of game — and taking NOTES!!! 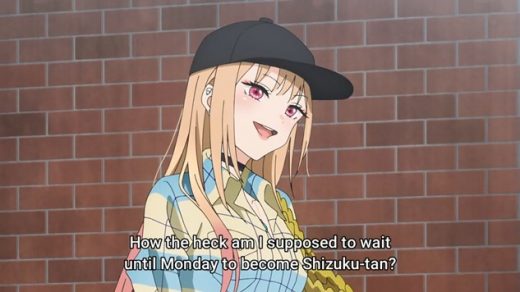 Episode 2 of the anime has us now settled in, and we are getting to know the personalities of Gojou and Marin quite a bit more.

Gojou turns out to be just as awkward and shy as we expected in episode 1, while Marin has more self-confidence than just about any teenage girl in an anime EVER.

Well, until we realize there is a tiny chink in her confidence armor as well.

As laughs go, this episode was even funnier than the first one as, even though it was much more risqué, it was still all done with an overcoat of sweetness and innocence that I really liked.

Marin too is absolutely lovely — in the way she looks, of course, but mainly in her personality as she is funny, smart, flirty, sweet and kind, while adamant about making sure she gets exactly what she wants.

Gojou is adorable in his embarrassment and confusion and, while obviously a red-blooded male, more worried about not embarrassing her than embarrassing himself.

All in all, episode 2 was very very funny, while it laid the groundwork for upcoming episodes to show off this new relationship developing in a fabulous way — with two characters that are interesting and funny, and with a plot that hasn’t been done before.

And that’s rare in an anime, isn’t it?

Now I’m dying to see the Shizuku-tan costume Gojou sews for Marin, and just how fabulous she looks in it. Aren’t you?

Check out the My Dress-Up Darling trailer, for a reminder of how cute Gojou and Marin are, and watch episode 2 of the anime on Crunchyroll.