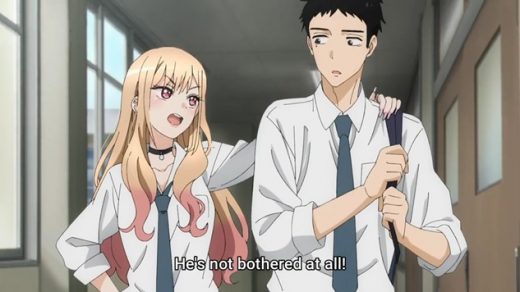 I might as well just start this My Dress-Up Darling Episode 3 recap and review with the same sentiments of my previous ones — “Yep, this is one of the best anime of Winter 2022. Without any doubt at all”.

Because, damn, this anime is good.


So, let’s get right into today’s latest episode of the series.

A rom-com anime that is not only my favorite of Winter 2022 so far but, from the MyAnimeList rating of the show, seems to be loved by many others as well. 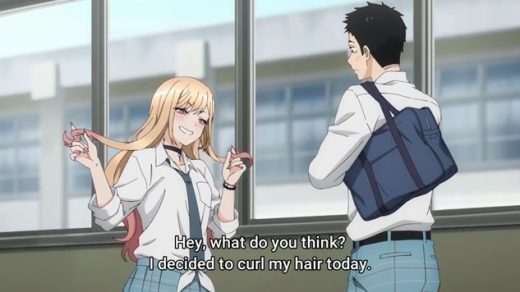 My Dress-Up Darling, Episode 3 begins with poor Gojou having naughty dreams about Marin. Dreams that mean, when he meets her in the school corridor soon after, his head looks like it might explode his face is so red.

Marin’s friends save him by arriving, and asking her if she is being annoying to him.

As she walks away, though, Gojou hears two girls asking “Is she going out with him?” then laughing and saying “No, of course she isn’t”.

This freaks Gojou out so much, he spends the rest of the day avoiding Marin. Even when she asks him to go shopping with her, he declines and runs away.

Crouching down a few blocks from the school, he apologizes to Marin out loud, only to find her standing next to him demanding to know why he is avoiding her.

Of course, being someone who has never had a friend, and is a complete outsider at school, he doesn’t want Marin to be associated with him, as he feels it won’t be good for her.

So, when he tries to avoid any interaction with her, you can’t really blame Gojou. After all, if you have been bullied your whole life, your brain would likely process others’ criticizing his friendship with Marin as a big threat to her — and something that should immediately be stopped. 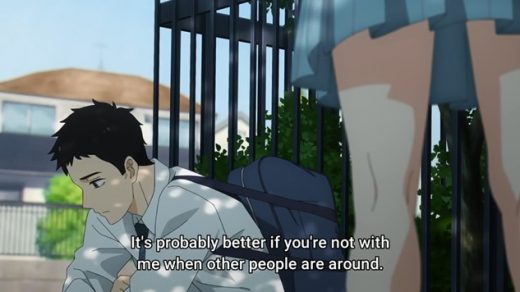 So he mumbles, “People are going to think we know each other. So, it’s probably better if you’re not with me when other people are around”.

“What are you even talking about?” snaps Marin. “We’re already friends”.

Proving, yet again, what a wonderful person Marin is, as the people she cares about, even ones she has just met, are far more important to her than the opinions of outsiders. 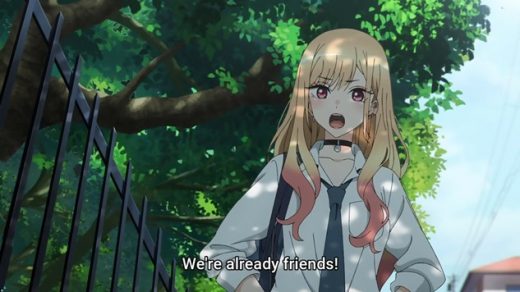 Gojou then confesses he heard some people speculating he and Marin might be going out.

She laughs, says “Well, then why don’t we?” and grabs his hand, pulls him along and insists he goes shopping with her.

Soon the pair are at the hobby shop picking out fabric for Marin’s Shizuku-tan costume, and Gojou shows her the sketches he has made for the dress.

Marin is blown away, as she can’t believe he has been so detailed about his dress-making plans.

Of course, as Marin usually makes mistakes when she picks out her own cosplay items, she wants one color of wig for her Shizuku-tan costume and Gojou tells her another color would be better.

It is then for the first time Gojou realizes he is being useful to Marin, as she thanks him for not allowing her to make yet another cosplay mistake.

Then it’s time to buy underwear and a garter belt, and for Gojou to be embarrassed yet again, followed by dinner at a ramen shop.

And that was Gojou’s entire evening gone — having fun with Marin, and not even realizing it. 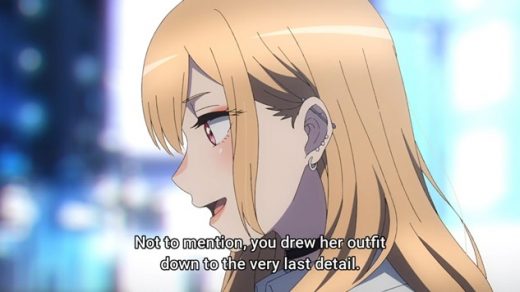 Until, when they are walking home together, and Marin is showing him photos of the cosplay players she loves on the Internet, and he confesses why he doesn’t use the word “beautiful” very often. (Watch the episode to find out why).

And she confesses she was surprised he played the Slippery Girls games, and that she was so happy he drew Shizuku-tan’s outfit right down to the last detail.

My Dress-Up Darling, Episode 3 ends with Marin telling Gojou when the next cosplay event is, and him realizing he needs to have her Shizuku-tan outfit ready by then. Yikes! 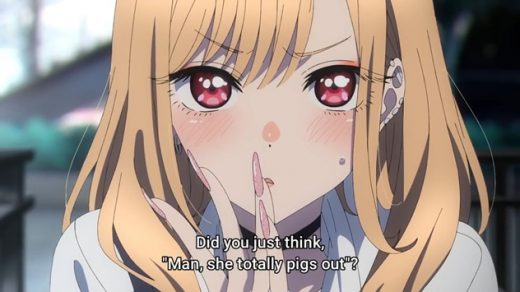 This anime just gets sweeter and funnier and more interesting with every episode.

Marin is the waifu half the planet would like — I mean who doesn’t love a girl who is drop-dead gorgeous, fun to be with, sweet, kind and definitely has her own personality and…couldn’t give a damn what other people think about her or the people she likes.

Gojou is still incredibly shy, too much in his own head for his own good, and far too worried about what other people think.

But, when you consider he has been an outsider his whole life, and has been put down by girls at school for simply existing, it’s no wonder he is careful about what he does around other people, and so is worried about Marin’s reputation.

After all, he knows how much it hurts when others make fun of you.

Thankfully for Gojou though, Marin will never allow him to stay away from her just because of what other people may think. That could also set us up for fireworks in later episodes, as Marin stands up for the person she likes.

Now that’s something to look forward to, eh?

All in all, My Dress-Up Darling, Episode 3, “Then Why Don’t We?” couldn’t be more appealing if it tried.

The anime features two incredibly likeable main characters, a gorgeous art style, excellent animation, a well-written script and had me laughing out loud more than once.

Plus, the plot revolving around the making of cosplay outfits is unique and fun, while the activity itself is helping cement the close relationship Marin and Gojou are creating with each other.

In other words, roll on Episode 4, as it can’t come fast enough. Especially if it includes a cosplay event.

You can watch My Dress-Up Darling at Crunchyroll.

The anime is based on the superb manga series by Shinichi Fukuda. The series is published by Square Enix, and you can order the volumes currently available in English via their website.

Watch the official trailer for the manga series below.