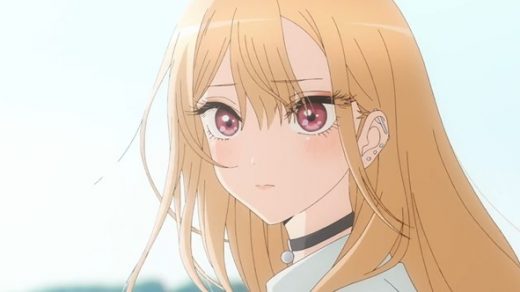 While in some respects My Dress-Up Darling, Episode 8, “Backlighting Is the Best” seems to be about the now-four-friends — Marin, Gojou, Juju and Juju’s sister Shunju– scouting a possible photography location, in reality, it is much more about Marin and Gojou becoming closer and closer.

Even though neither of them really realize it yet.


So, let’s get started on My Dress-Up Darling, Episode 8 recap and review, to delve into that a little further. 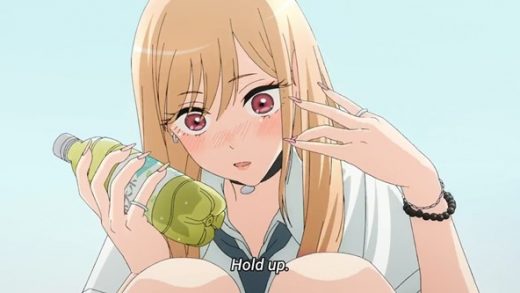 My Dress-Up Darling, Episode 8 recap — Backlighting Is the Best“

The new episode begins with Marin and Gojou meeting with Juju and her sister Shinju to talk about cameras.

But it quickly moves onto the four heading to an abandoned hospital to check it out for their upcoming cosplay photo shoot, where Juju proves she is terrified of scary places.

She then tells Gojou a sweet story about why she must walk through the hospital, even if it scares her. And it all has to do with her lifelong goal of being a ‘magical girl’.

Meanwhile, Shinju is showing Marin all about the prettiness of backlit photos, and Gojou makes Juju pass out as he innocently holds her hand.

But it is the latter half of My Dress-Up Darling Episode 8 that is so lovely, as Marin rushes over to Gojou after school one day and asks him to take a sporadic trip to the beach.

As, in these scenes, you quickly see how close the pair have become, and how much more comfortable Gojou is with Marin.

So much so, they now spend most of their free time together.

At the beach, Marin is concentrating on food, leading to a very funny scene with a scavenging seagull, and then to Marin and Gojou paddling in the water.

Then Gojou reveals he has never been to the beach before, and that it’s a good thing he came now with Marin as his grandfather says he needs to experience all kinds of new things.

And it is then Marin reveals just how much she is in love with Gojou as she quickly says to him, “Then let’s go to LOTS of different places this summer! Just the two of us!”.

Gojou immediately agrees, leading to Marin rushing out of the ocean leaving Gojou to continue paddling as she realizes that aggressive thing she has just said… “Just the two of us”.

Sitting down on the beach clutching a cold bottle of tea to her face is the only way Marin can cool off her embarrassment.

It is then Marin takes a ‘backlit photo’ of Gojou, who is still paddling in the water, and exclaims how amazing he looks framed by that gorgeous light.

Oh yes, Marin is in love, love, love. And poor Gojou? He is still oblivious. 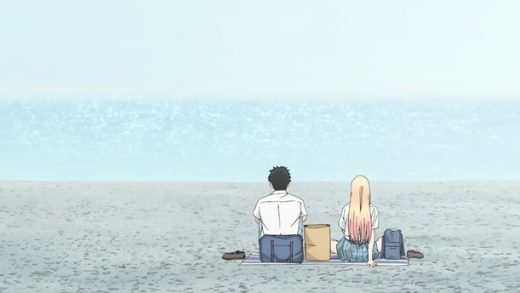 My Dress-Up Darling, Episode 8 recap — “Backlighting Is the Best“

Episode 8 of My Dress-Up Darling was one of the ones I laughed the loudest at.

Because that scene with the seagull is hilarious, as Marin loses her burger and Gojou throws their French fries at it, and Marin is delightful as she is so happy to be at the beach with Gojou she can hardly contain herself.

This episode is also one of the sweetest ones, from how happy Marin is to be around both Juju and Shinju her sister, to how ecstatic she is to be on a ‘beach date’ with Gojou.

So much so, the words “Just the two of us” have shot out of her mouth before she has time to realize it.

READ: In which My Dress-Up Darling manga chapter does Marin tell Gojou she loves him?

And, even if she is momentarily embarrassed about being so forward, as soon as she realizes Gojou’s agreement to her plan means she will get to spend most of the summer break with him, she is “squeeing” so loud it’s a wonder they couldn’t hear her in Tokyo.

Just like Sasaki and Miyano, this ever-so-sweet romance is so romantic comedy is fulfilling every one of my anime dreams.

Marin is becoming ever more my favorite best girl as each episode airs and, God, could Gojou be any sweeter?

Read loads more about my current obsession — My Dress-Up Darling — on Leo Sigh and, of course, watch this fabulous anime on Crunchyroll.