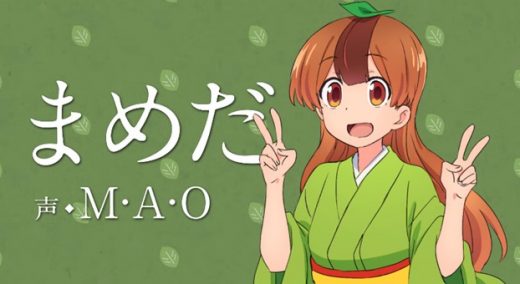 The folks producing the upcoming supernatural anime My Master Has No Tail (aka Uchi no Shishou wa Shippo ga nai) have just released a Mameda character video to promote its September release.

The video shows the shape-shifting tanuki protagonist and pranks-obsessed Mameda just as crazy and funny as you will know she is, if you have read the TNSK written and illustrated manga series.

Mameda, a small village girl who has just moved to Osaka, is voiced by the wonderful Mao Ichimichi (aka M.A.O.) (Hinata in Life with an Ordinary Guy who Reincarnated into a Total Fantasy Knockout).

My Master Has No Tail is directed by Hideyo Yamamoto (Strike the Blood) and, along with M.A.O. as Mameda, also stars Yumiri Hanamori as Bunko, Ayana Taketatsu as Enshi, Akira Ishida who plays Utaroku, and Junichi Suwabe as Bunchou.

The My Master Has No Tail manga is published in the west by Kodansha Comics, with seven volumes currently out in English.

Kodansha describes the story of the manga like this:

Mameda is a tanuki who was born in the wrong era – all she wants is to trick humans, but that age of tanuki shenanigans is over. But one woman, a rakugo master named Bunko, shows Mameda it’s still possible to cast magic on humans…only with words, not illusions. Mameda is determined to become Bunko’s apprentice, but can she convince the stoic master to take her on…?

My Master Has No Tail will premiere on September 30th, 2022 in Japan.

Watch the My Master Has No Tail Mameda’s character video below. It’s cute and adorable.

RELATED: The My Master Has No Tail character designs are gorgeous