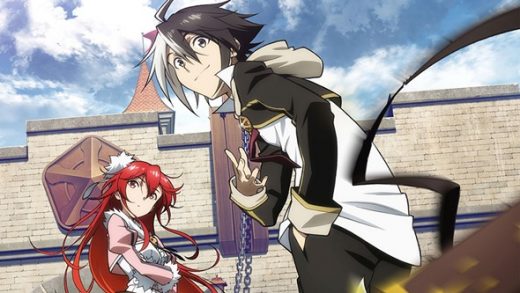 I am always up for a good action fantasy anime that is a lot of fun, which is why the just released new Classroom for Heroes key visual caught my eye. (see below)

After all, a visual with main character and transfer student Blade looking very cheeky, while the adorably cute Arnest Flaming looks on, definitely makes the upcoming anime worth keeping an eye on.

Along with the new Classroom for Heroes key visual today, we also got an official website, and learned the anime is being directed by Keiichiro Kawaguchi (Spy Classroom), with series composition by Naoki Hayashi (Higurashi: When They Cry – GOU).

Chief animation director is Kosuke Kawamura (Island), who will also be character designer.

Studio ACTAS is in charge of anime production.

Classroom for Heroes is based on the light novel series written by Shin Araki, and illustrated by Haruyuki Morisawa.

A manga series is also being published, with 14 volumes currently out in Japan.

Anime News Network has this to say about the plot:

The top student in the school, a dutiful girl nicknamed “Empress of Flame,” she has an irritating encounter with a light-hearted boy in the school hallway one day who seems to equal her powers, though she’s never seen him before.

He introduces himself only as Blade, and Arnest soon finds out not only is he transferring into the school as a new student, but she is personally requested by the King to help him settle in to daily life in Rosewood Academy.

The Classroom for Heroes anime (aka Eiyuu Kyoushitsu) is scheduled to premiere in 2023.

Check out the cute new Classroom for Heroes key visual above. Now doesn’t that make the anime seem like a lot of fun?