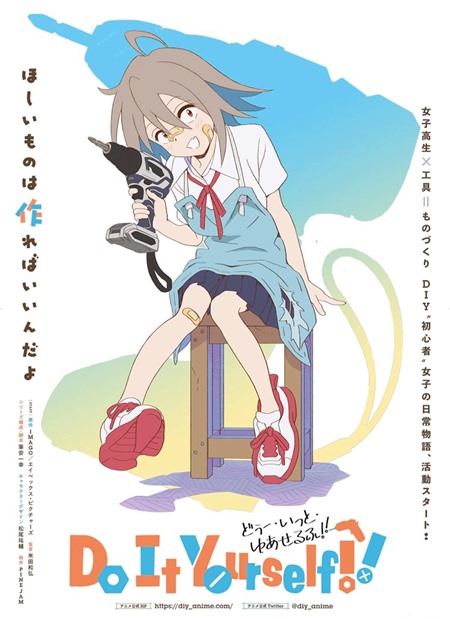 A couple of new Do It Yourself!! key visuals have been released for the upcoming PINE JAM anime TV series.

The latest key visuals feature Serufu Yui, one of the show’s main characters. In one she is sporting a drill, while the other visual shows her disheveled appearance from various angles.

Serufu is clumsy, which is why she is always covered in cuts, bumps and band-aids.

And, yes, these things are so cute I am now left hoping we will get similar visuals for the other five — Kurei, Takumi, Purin, Jobuko, and Shii. 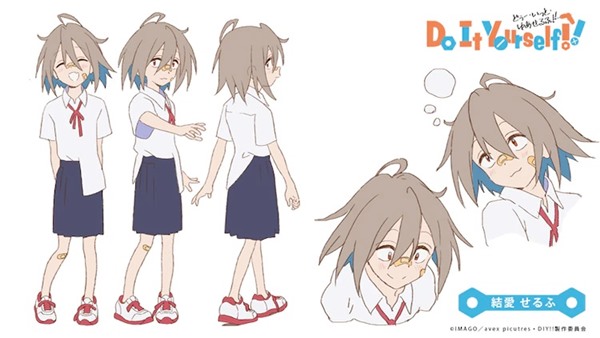 Do It Yourself!! is an original anime series about a group of girls learning how to build things, and become self-sufficient.

Something we need in this day and age, as so many young girls still seem to believe they can’t do what boys can do.

Hopefully, just like the fabulous Laid-Back Camp encouraged girls to go camping by themselves, Do It Yourself!! will motivate more girls to pick up do-it-yourself skills.

Do It Yourself!! is directed by Kazuhiro Yoneda (Gleipnir), with animation production by PINE JAM (Gamers!, Gleipnir).

The main cast has yet to be announced. Until they are, enjoy the cute graphics.