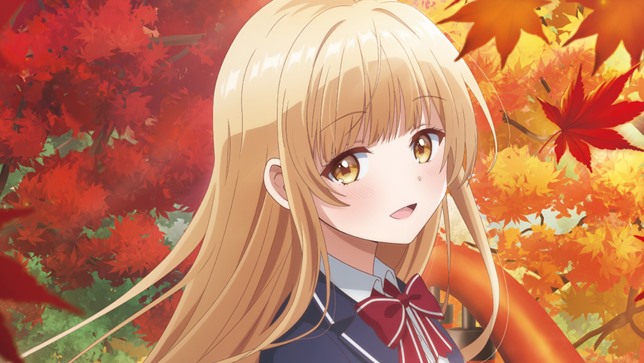 The Angel Next Door Spoils Me Rotten anime series is due to premiere in January, 2023.

In the run-up to that premiere, the production committee is releasing cute promotional material that will likely get you as excited to see the rom com anime as I am.


Including today’s The Angel Next Door Spoils Me Rotten key visual, which features girl-next-door Mahiru enjoying the gorgeous Fall leaves.

That orange, red and gold visual shows Mahiru wearing her school uniform, and smiling as the wind tousles her long blonde hair.

The Angel Next Door Spoils Me Rotten anime series is based on the light novel series by Saekisan.

It is being directed by Kenichi Imaizumi (After School Dice Club), with Keiichiro Ochi (The Quintessential Quintuplets) in charge of series composition, and Takayuki Noguchi (Higehiro: After Being Rejected, I Shaved and Took in a High School Runaway).

Project No. 9 is in charge of animation.

Yen Press is publishing the novels in English, with four novels currently out, and a fifth one due to be published in February, 2023.

Mahiru is a beautiful girl whose classmates all call her an “angel.” Not only is she a star athlete with perfect grades—she’s also drop-dead gorgeous. Amane‚ an average guy and self-admitted slob‚ has never thought much of the divine beauty‚ despite attending the same school.

Everything changes‚ however‚ when he happens to see Mahiru sitting alone in a park during a rainstorm. Thus begins the strange relationship between this incredibly unlikely pair!

Watch the latest The Angel Next Door Spoils Me Rotten trailer below.