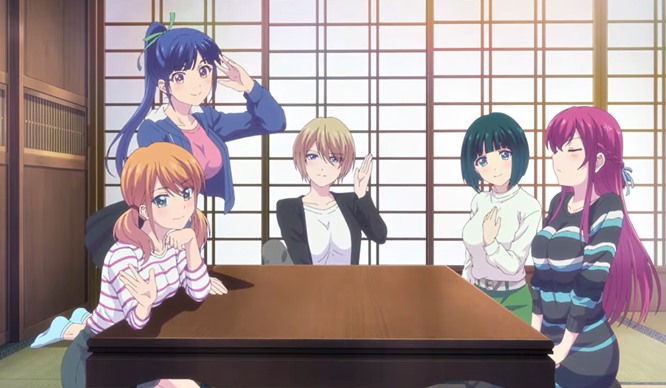 If you had any doubts the upcoming rom-com The Café Terrace and Its Goddesses would feature some of anime’s cutest girls, the just-released key visual and teaser trailer will immediately disavow you of that notion.

The new The Café Terrace and Its Goddesses key visual features the five family members of protagonist Hayato’s grandmother.


Girls who were a surprise to Hayato when he first met them, as he didn’t know they existed, but girls who he is now working hard to help, so he can protect their dreams.

The Café Terrace and Its Goddesses also got a trailer showing Hayato meeting the five café goddesses, and then having to deal with their unique (and sometimes annoying) personalities.

While also sometimes admitting, they are a lot of fun.

The Café Terrace and Its Goddesses trailer also introduces the six main characters and their voice actors.

Sayumi Suzushiro (In the Heart of Kunoichi Tsubaki) as Ami Tsuruga

Asami Seto (The Rising of the Shield Hero) as Akane Hououji

The Café Terrace and Its Goddesses anime is based on the manga by Kouji Seo.

It is being directed by Satoshi Kuwabara (The Quintessential Quintuplets), with Keiichiro Ochi (Adachi and Shimamura) in charge of series composition, and Masatsune Noguchi (Genie Family 2020) creating the character designs.

Tezuka Productions is in charge of anime production.

Kodansha is publishing the English version of the manga in the west, with one volume currently out and the second one due later this month.

When Hayato’s grandmother passed away, he planned to sell her rundown café on the shore—not realizing that it was also home to five young women who call themselves her family?! Their desperation to keep the café open convinces Hayato to give it a shot…but even their best intentions might not be enough to make it work!

And can he even work with these five unruly women? No matter what, he’s got his work cut out for him!

The Café Terrace and Its Goddesses will premiere in April, 2023.