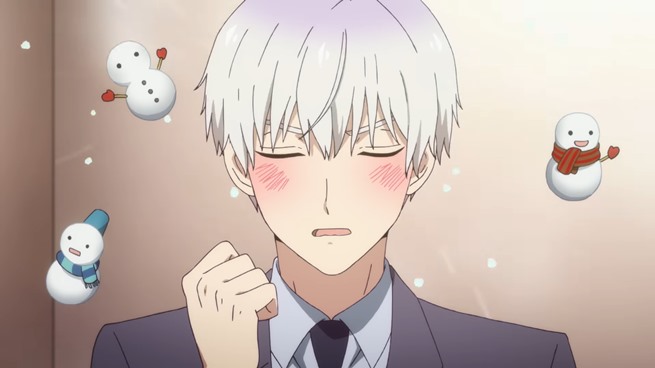 The rom-com anime The Ice Guy and His Cool Female Colleague got a new key visual release on Twitter today in advance of the show’s January 4th premiere.

Along with the key visual, we also got an adorable trailer that makes the anime’s characters look wildly interesting, as well as incredibly cute.


Now this one is definitely an anime I will be watching the day it releases, as just look at that gorgeous artwork in the visual, and look how happy the characters appear to be. Heck, with characters drawn like that, this one looks like it will be lovely.

Throw in this plot:

Himuro-kun, an office worker who belongs to an ancient race of supernatural beings, is a newcomer to the company. When his emotions get out of control, he creates snowmen and snowstorms. Something that can be a problem at work. But, in reality, Himuro is a warm and kind person who loves cats and flowers. With his emotions, though, he is unable to get close to either of them.

To make things even more interesting, Himuro has a crush on his co-worker Fuyutsuki-san. A woman who is often able to come up with solutions to his problems. Fuyutsuki-san, who is seen as cool by others, is also very interested in the mysterious Himuro-kun.

The problem is, everyone else knows about Himuro’s feelings for Fuyutsuki, but she does not. Now it’s up to him to do everything he can to win her heart.

and not only does the anime look beautiful, but it sounds hella fun and interesting too.

The Ice Guy and His Cool Female Colleague (aka Koori Zokusei Danshi to Cool na Douryou Joshi in Japan) is based on the manga by Miyuki Tonogaya.

The anime is being directed by Mankyuu (THE IDOLM@STER CINDERELLA GIRLS Theater), with series composition by Tomoko Konparu (Ao Haru Ride), and those gorgeous character designs and animation direction by Miyako Kano (episode animation director of Golden Kamuy).

Studio ZERO-G (Grand Blue) is in charge of anime production.

Watch the just released The Ice Guy and His Cool Female Colleague trailer, and get a load of those adorable characters. Cuter than heck, right?