One Cure for Man, aka James Parkinson and one of my favorite British singer songwriters, has a new song out this week. (Listen at the bottom of this long article)

Called ‘Too Many Songs‘, in it Parkinson sings about the struggle to get people to listen to the music he creates.


After all, with attention spans being short nowadays, complex and deeply emotional songs that need more than one listen to in order to understand an artist’s message, are often discarded after just a few bars.

Easy listening, whether it’s elevator music, bland pop songs or even uncomplicated rock or heavy metal often seem to be the songs the masses listen to and rave about.

As Parkinson himself explains on why he wrote One Cure for Man’s ‘Too Many Songs‘:

“Too Many Songs” is not as much about the struggle to write a song with meaning, depth or
emotion but the struggle to get the world to listen to it. Songs are becoming more one
dimensional and simple, dominated by the novelty of technology and sound. People seem to want
easy, catchy songs and struggle to understand complex lyrics, subject matters or chord
sequences. I’m still optimistic there is an audience, but you can’t help feeling the sense of loss
and the decline of songwriting as an art-form.

And, while I do not think he is completely correct about the reason so many talented artists struggle to get their music heard, I do often struggle with something similar myself when it comes to the music I listen to and to other things that entertain me.

To some extent, I blame the Internet. Now, think about it.

When many of us were growing up, me in the 1970s, you maybe in the 80s or 90s, the only time you had access to a song, a book, a movie or a TV show was when it showed up on the radio or TV or, in the case of books or video games, you bought them in a shop. And, when you did get them, they were special.

Nowadays, in our world of instant gratification, there are so many assaults on our time and attention from millions of sources online, we don’t appreciate what we do pay attention to, while also missing so many of the amazing things.

In the same vein, when I can access any song, TV show, book or video game — legal or otherwise — in a few clicks of a mouse, for me the choice is overwhelming.

Sometimes the more mainstream things win out then, because they are easier to find among the deluge and also often involve less of a time commitment. Not because I don’t prefer the more complicated, more obscure things. 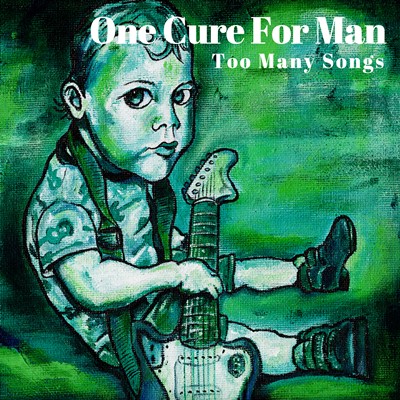 One Cure for Man’s ‘Too Many Songs‘ — the song itself

Interestingly though, while Parkinson worries about easy, catchy songs being what people want, and not wanting to write those himself, what struck me is he is actually somewhat doing that without realizing it.

Because, even though the lyrics of the songs he writes tend to be beautifully complex and complicated, and the music he composes is gorgeous but certainly not simple, for some reason when put together they produce a song that, may not be ‘simple’ per se, but is definitely extremely accessible.

The images his lyrics portray quickly appear in your head, his melodies are beautiful and tend to stick with you long after the song ends, and his guitar playing is superb. Paired with the artistically stunning music videos he always releases, and One Cure for Man’s songs are exactly the music people love.

In other words, I don’t think the problem for a musician finding an audience for his music has much to do with ‘simple’ versus’ complicated’, or the “decline of songwriting as an art-form”, although those things may play a part.

Instead it has more to do with the sheer magnitude of work released. And the insane amounts of money behind specific artists.

So much that, incredibly talented musicians like James Parkinson (One Cure for Man) are simply up against major record labels promoting the hell out of their talent to the detriment of those musicians who don’t have the money they do.

Up to and including the so-called ‘indie music world’ now being infiltrated with these companies too.

But, being the eternal optimist, I still believe, if a musician sticks with it and is talented enough, eventually their music will be discovered. In many cases, that only needs to happen once and by the right person.

Conversely, those musicians that give up will never know if their next song was the one that would have catapulted them into the public eye. If they hadn’t put down their guitar and walked away.

For One Cure for Man, I have believed since I came across his music after his mother promoted his song ‘The Haunted‘ on Facebook, he is one of those musicians that does have the talent and the phenomenal music to eventually grab the right person’s attention and, thus, get his music heard by millions.

Because, honestly, if I didn’t, I wouldn’t be spending my time writing about him. (Keep reading, I haven’t finished yet!)

One Cure for Man’s ‘Too Many Songs‘ music video

One Cure for Man’s ‘Too Many Songs‘ comes with another of his lovely videos.

Videos that are filmed in his hometown of Barnoldswick, England (my hometown too, interestingly), and often in his living room.

His ‘Too Many Songs‘ video, like his music videos for ‘The Haunted‘ and ‘Everything‘, was shot by videographer Jason Marshall.

Again, filmed in James’ Victorian House, but this time highlighting some of the things that have influenced his music — whether that is books, music, art or even things from pop culture — it’s no wonder One Cure for Man songs are always so multi-layered.

‘Too Many Songs‘ itself is beautiful, not only for the catchy melody (and yep, James, sorry it’s catchy because it’s still stuck in my head an hour after I heard it), but also for his always gorgeous vocals, the now almost prerequisite guitar solo I love in his songs so much, and his ability to write about a complex and frustrating subject in a way that makes you actually care.

Listen to One Cure for Man’s ‘Too Many Songs‘ in both his official music video down below, and on the Spotify doo-hickey down there too.

And, because I love James Parkinson’s work so much, do check his other music out on his YouTube channel (gorgeous music videos) and on his Spotify account.

Once you do, you’ll be in love with what he produces just like I am.

One Cure for Man’s ‘Too Many Songs‘ was written by James Parkinson, and features the musician on vocals, piano, guitars, bass, keys and percussion, with his equally talented brother Ben Parkinson on drums.