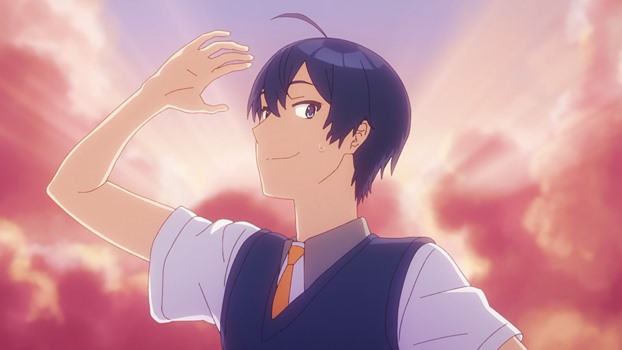 While the usual fools on various forums slam the currently airing Osananajimi ga Zettai ni Makenai Love Comedy (aka Osamake) as being “a disgusting harem romcom”, if they paid attention to the actual show instead of their delusions about it, they would see it is not.

In fact, Osamake is a clever twist on the usual romcom, as it features the protagonist and the girl who is in love with him coming up with a comic revenge plan to get back at the girl he is in love with.

No pining away while his love dates another guy. Instead, protagonist Haru is persuaded by childhood friend Kuro to get revenge on Kachi for deciding to date another guy instead of him.

That one decision sets the stage for the rest of the series, and quickly causes Haru to become someone you like less and less.

OsaMake: Romcom Episode 1, also known as ‘RomCom Where the Childhood Friend Won’t Lose‘, begins with Haru on a bridge meeting Kachi. She is in his high school class, and has also recently become famous for writing a book, and for various photoshoots she has participated in for popular teen magazines.

Haru tells Kachi he loved her book, which thrills her no end. Then, of course, he immediately falls in love with her.

Several months later back at school, Haru’s friend Tetsuhiko tells him Kachi is way out of his league.

In her interactions with her schoolmates, however, Kachi comes off as cold and a bit of a bitch. So it’s not surprising she pays little attention to Kachi in school.

She has apparently confessed her love to him, but Haru turned her down. Tetsuhiko reminds Haru she is out of his league as well, as Kuro is pretty, nice and popular. 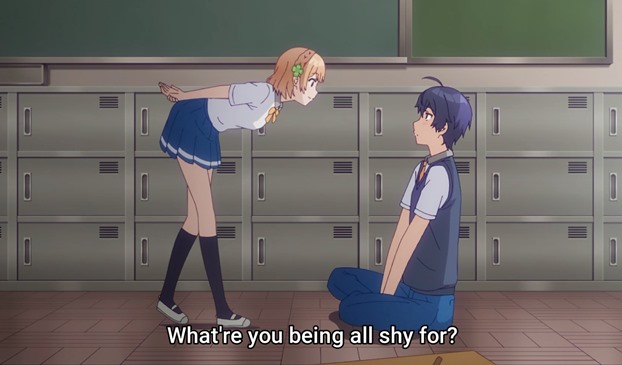 At that moment, Kuro arrives in the classroom and begins to tease Haru about liking him. He blushes and tells her to stop.

After teasing him, and him turning her down again, she says she was just joking when she asked him out (she wasn’t!).

But, as Haru is dealing with that, a friend of Kachi’s suddenly blurts out Kachi has started dating Abe, a famous teen actor. Haru then finds himself with a broken heart.

Later in the day, Koru sees Haru sitting on a river bank crying about Kachi, so she comes up with a plan for them both to get revenge on her. After all, she says, Kachi has been cruel with the way she treated Haru — friendly one minute, dating someone else the next.

Haru decides he will find Abe’s weaknesses and expose them, thus hurting Kachi at the same time. 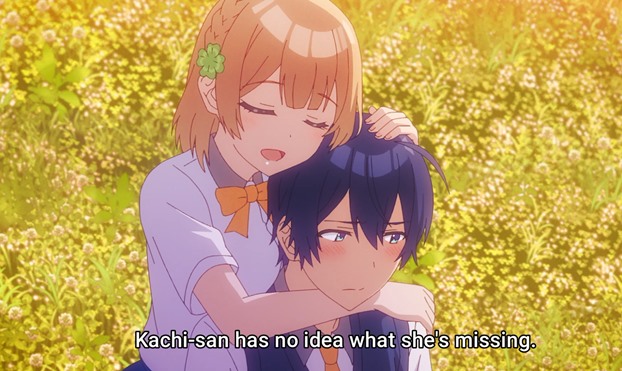 Koru says that’s a terrible plan as, while Abe and Kachi would lose, Haru himself still would not win.

She then decides they should pretend they are dating, as that will make Kachi sit up and take notice. Win-win for herself, as she tells him, as she gets to go out with the guy she loves.

But, as Koru tries to kiss him to ‘seal the deal’, Haru freaks out and runs away.

Deciding to go back to exposing Abe’s weaknesses, Haru asks around about him. Abe finds out and confronts Haru on the rooftop, but not in the way the viewer expects.

Instead, he tells Haru he now remembers who he is — Maru Sueharu, a famous child actor.

So far, Osamake: Romcom is fun, silly and entertaining.

It features cool and memorable characters, nobody you hate too much (yet!) and a plethora of girls that are decidedly cute.

Koru, of course, is the cutest and most fun, but there are also hints of Kachi being less bland than she initially appears. Haru is a bit of a jerk, but not a protagonist you can’t stand (yet!).

The artwork is pretty, the voice acting is excellent and the show doesn’t take itself too seriously. In fact, it throws in a bunch of tropes and then makes fun of them.

Overall, the first episode of Osamake: Romcom was highly entertaining, and left me most definitely wanting more.

You can watch Osamake Episode 1 on Crunchyroll.