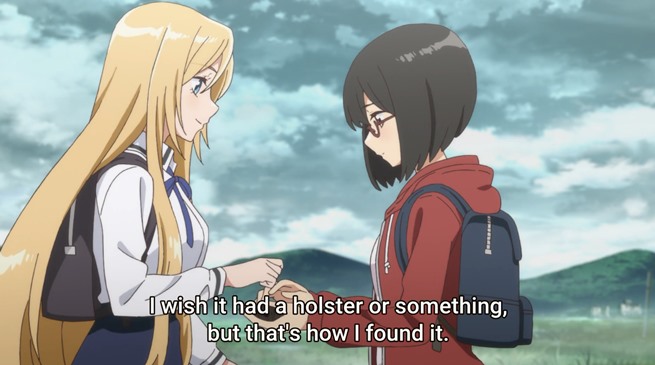 To say Episode 1 of the isekai anime series Otherside Picnic (aka Urasekai Picnic) is confusing is an understatement as, right from the first few seconds of Episode 1 as we see Sorao Kamikoshi lying in a pool of water, we have little to no idea what’s going on.

Nor do we really know who the two girls are or why Toriko has a gun. At least not at first.

Fast forward to the end and, honestly, I wasn’t much closer.

Except that I knew Sorao had entered the Otherside alone, and that Toriko Nishina had gone back to the world to look for a lost friend. Once there, she had stumbled across Sorao and, from then on, the two became partners in crime.

Although, right now, there is little reason pointing as to why either of the girls would want to team up with the other one.

Other than Toriko admitting, if she did head back to the Otherside by herself, chances are she would die quickly. 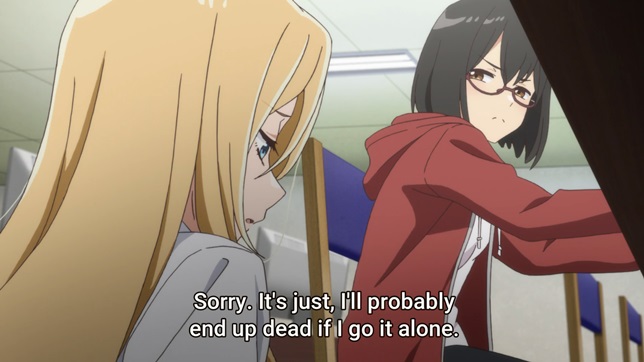 Not that I’m complaining when it comes to being confused, especially during the first episode of Otherside Picnic, as I like my mystery anime series to be just that — mysterious, and not to have everything spelled out right from the start as if it’s believed I can’t use my brain.

We do also learn that it seems Toriko is quite a bit ditzy and Sorao isn’t sure why she was in the Otherside, or if she has any interest in going there again.

Go she does though, as Toriko decides it makes more sense to head back into the other world as soon as possible, as that way they can hunt more of the ‘wiggle-waggles’, collect the mirror cubes they drop when they kill them, and sell them.

Something they then do, but this time taking a route different to the one Sorao took on her first trip there.

A route that requires an elevator ride that stops at different floors, some with monsters on them, and a climb down a long ladder once they arrive in the Otherside. 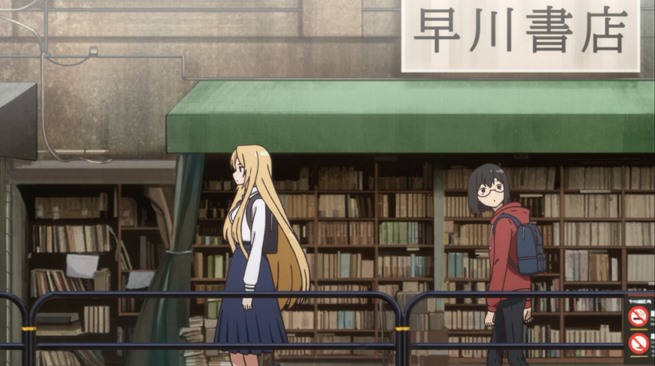 Soon they see their first dead human, although we have no idea who it is, come across another wiggle-waggle, which they eventually manage to kill, and then collect the cube it drops.

It is only then the two girls get the heebie-jeebies and rush off terrified.

Of course, being the obviously strange individuals they both are, that fear lasts seconds before they are planning on partying with the money they make from selling the cube.

All around then, Episode 1 of Otherside Picnic is a confusing episode that leaves us with just as many questions as answers.

That uncertainty, however, does leave me wanting more as there is so much yet to learn.

Who is Toriko? Why were she and Sorao in the Otherside? Why does Toriko seem to be an expert with guns? Who is the friend she has lost and what happened to her? What is the Otherside, and what are the wiggle-waggles? Will we meet more of them or are there other monsters to discover? Is this a yuri series as advertised, or is it straight isekai with a they-still-get-to-return-home every day twist?

Honestly, the Otherside Picnic anime could head off in any direction in Episode 2, but I’m certainly left interested enough to find out which one it chooses. 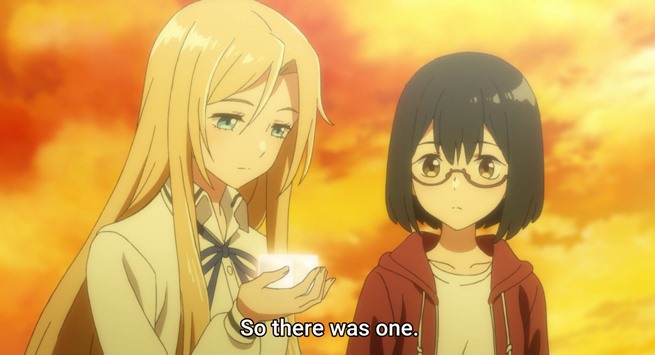 Animation and artwork of Otherside Picnic

The animation in Otherside Picnic is average, as is the soundtrack so far.

The artwork of Episode 1, however, is quite beautiful in places and especially in how the characters seem much more cartoon-like than the more realistic backgrounds. Particularly when we see the close ups of the two girls.

I also like how both girls speak — much more seriously and more ‘authentically Japanese’ than in most anime, and with an air that seems ‘grown up’ even though they both look like young teenagers much of the time.

In reality though, it seems Sorao is a university student so in her late teens or early 20s, while Toriko is of an indeterminate age and, right now at least, with a background we know nothing about.

Other than these general observations of Episode 1 of Otherside Picnic, it is hard to say much else about it yet, as so much of the anime is still up in the air and incredibly vague. Character development, or lack thereof, will have an impact on future episodes as well.

Meaning, in upcoming episodes, the writers could cement the excellent parts of Episode 1 into a fun, interesting and somewhat creepy anime, or it could quickly go down the tubes and become something I won’t stick to through the end.

Only time will tell which it will be.

Episode 1 of Otherside Picnic, along with all the other episodes of Season 1, is currently streaming on Funimation.