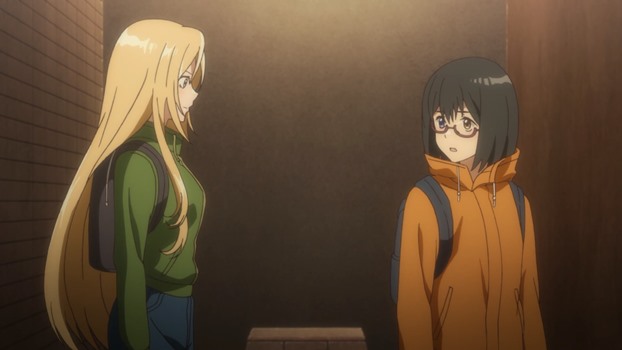 The third episode of Otherside Picnic is a little more simple than the first two, in that it just features Sorao and Toriko without any additional characters — other than creepy big-headed monsters appearing in the plot.

Interestingly, however, that made it the scariest one so far for me. Particularly as the eeriness and desolation of the Otherside is magnified when it is just the two girls wandering around in the mist.

Just like the first two, episode 3 involves Sorao and Toriko heading back to the Otherside for another poke around. This time with Toriko wanting to find a house she has been to before.

The last time she was there, she found her gun and ammunition. It is also the place where her lost friend, Satsuki, once took her and Toriko wonders if they can find some clues about her disappearance.

Most of the story is taken up with the girls wandering around throwing stones in front of them. That way they can find the glitches before they walk into them and die.

The problem is the episode seems to be as aimless as the girl’s wanderings, with not much of a plot except for a lot of rock throwing and the pair eventually stumbling upon a deserted traditional Japanese village.

Not the place Toriko wanted to go to at all. 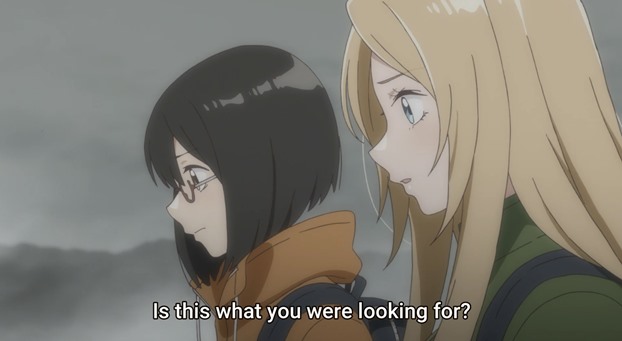 At one point, Toriko disappears and Sorao starts to run as she is scared. She is even more terrified, however, when she is grabbed from behind and pulled into an old hut only to find it was Toriko who grabbed her.

Soon, however, human-like figures with enormous heads  — the Big-Heads of the title — find them, and the girls have no option but to run while firing their guns back towards the large-headed figures killing them one by one.

It was here the episode ceased to be creepy, as the Big-Heads looked more ridiculous chasing them than threatening.

The girls eventually find their way back into the real world through a small shrine, and we leave the pair with Sorao deciding yet again she probably shouldn’t be going to the Otherside with Toriko again. 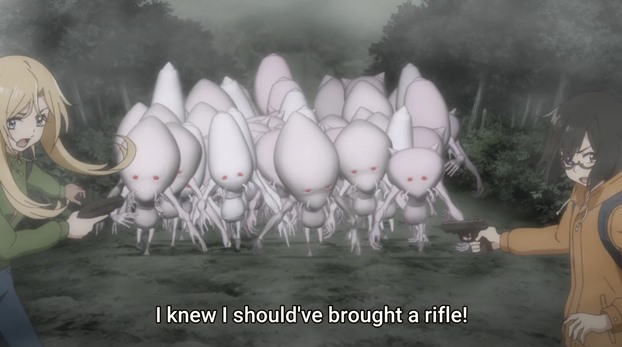 While the creepiness of the series was definitely magnified with the episode revolving around Toriko and Sorao, the plot still felt a little aimless.

Particularly as so much time was spent on explanations about throwing stones to detect glitches. To some extent it took up half the story, leaving the flesh of the plot — the Big-Head Village —  to be wrapped up quickly in the last few minutes.

As there is little explanation as to what any of these Otherside monsters are, or why they are dangerous, and they only seem to show up in one episode and then disappear, the anime has also become frustrating.

A little more information about the Otherside and its inhabitants then would be nice.

I did think “Big-Head Village‘ was more frightening than the previous episodes, but much of it still left me cold as we desperately need more plot development.

Sorao is also becoming annoying with her whining about teaming up with Toriko being dangerous, but then going off with her again anyway because she thinks she’s cute.

While Sorao seemed to be the most interesting one in the first episode of the series, now she is becoming the most vacuous as Toriko is proving she has more substance than Sorao.

I will stick with Otherside Picnic for a few more episodes to see if we get more context and story development, but it is becoming easy to see why a large number of initial viewers gave up on the series the more episodes they got into it.

The art is still pretty, the animation is decent and the voice acting is good. The yuri elements are also nicely done as they are not heavy handed, and the girls’ relationship is slowly developing.

Let’s see then what Episode 4 holds.

Meanwhile, for recaps of the first two episodes of Otherside Picnic, check out Leo Sigh here.