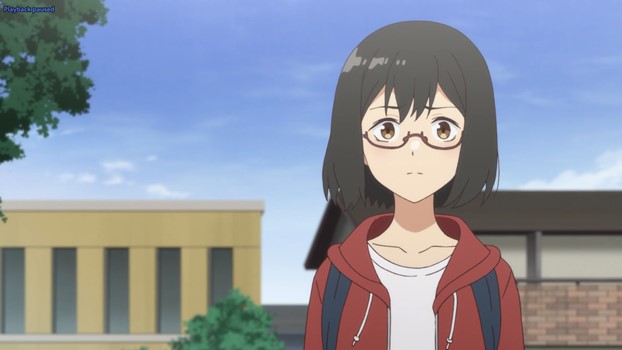 Up until this week, I was struggling with whether I would get through every episode of the Otherside Picnic anime, or if my interest in it would eventually wane.

Honestly, before Episode 4, it could have gone either way.


But when Episode 4 began with Sorao in the middle of the road hearing voices telling her to not return to the Otherside with Toriko or she would never be able to leave, my interest was renewed.

When Toriko introduced the urban legend of the Space-Time Man guarding the Otherside from intruders, hell, yeah, sign me up.

In this episode, we have Sorao convinced Toriko’s friend Satsuki is not trapped in the Otherside, but already dead, and Toriko rushing back there alone to find her.

Sorao is also being contacted by the Space-Time Man, who is sending her photos by text message, so she goes to Toriko’s friend, the researcher Kozakura, for help.

Things get weird, however, when Kozakura looks through Sorao’s photos and finds a photo of Satsuki. The even stranger thing is it was taken the day Sorao first met Toriko, but Sorao has never seen the photo before.

When three people begin hammering on Kozakura’s door, it looks like the Otherside is intent on contacting them. But, as we already know Kozakura doesn’t put up with bullshit, I wasn’t surprised when she grabbed a shotgun from under the floorboards and headed to the front door to confront them.

But nope, things are never as simple as that in Otherside Picnic, as is evidenced when the two girls open the door only to be confronted with a huge eye, and the screaming mouth of one of the people hammering on the door. A mouth that then pulls the girls into the Otherside.

Here we learn why Sorao is not as afraid of the Otherside as she should be because, after her dad and grandma joined a cult and then died, she’s been by herself ever since.

That kind of thing helps grow a strong backbone, I guess.

But hey, Sorao apparently isn’t alone in being a tough cookie, as Kozakura tells her Toriko no longer has parents either.

Soon Sorao thinks she sees Toriko in a deserted town but, as she tries to attract her attention by firing her gun,  she notices Kozakura walking towards the town in a trance.

I thought glitches killed those that walked into them, but apparently not as Sorao realizes the town is probably in a glitch and walks towards it. That’s when the Space-Time Man shows up asking why she didn’t heed his warning. 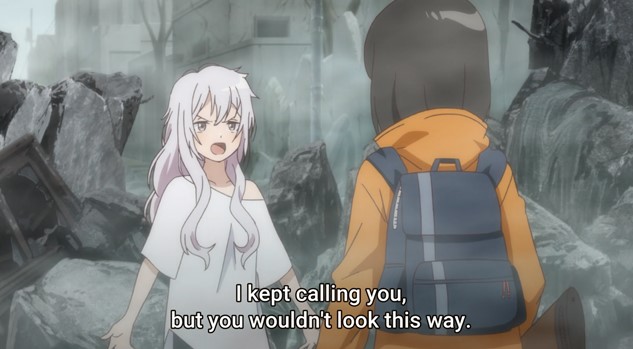 Sorao then sees Kozakura and other people that have been turned into plants, but also hears Kozakura shouting at her.  When she snaps out of her dream, Kozakura is right in front of her looking like she always does.

Remember in Episode 2 when Lady Hasshaku mesmerized Sorao into thinking Toriko was in danger, when it turned out it was Sorao herself?

It looks like something in the town now has the same ability.

But is it only Sorao that is being mesmerized, or is Kozakura being fooled too as she believes she heard the missing Satsuki calling to her?

Remember though Sorao’s eye is able to see through a glitch to what is really there, so she uses it to find Toriko in a replica of her own apartment. But Toriko refuses to leave as she says she has found Satsuki.

When Sorao looks out of the window, she sees what appears to be Satsuki hovering in the sky above them.

That’s when we realize Sorao is more clued in than Toriko, as she can see the true nature of the being in the sky and it’s definitely not Satsuki. 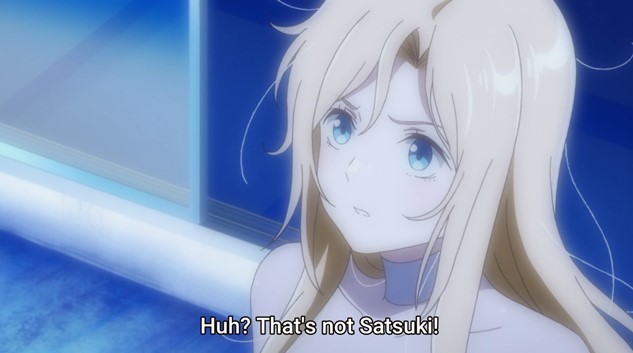 As Toriko decides to jump from the balcony to what she perceives to be Satsuki, and thus to a certain death, Sorao saves her by firing the shotgun at the being, which breaks into pieces and disappears.

Toriko realizes she has been tricked, and feels like she is going insane.

Episode 4 is the first time I felt like Otherside Picnic was coming together to create a cohesive story. It was also the creepiest episode so far.

Sorao is beginning to stand out as even stronger than Toriko, with Toriko allowing her love for Satsuki to be used against her by the Otherside beings.

Although Sorao still isn’t as emotionally healthy as she thinks she is, as she believes what she went through with her family joining a cult is ‘normal’. It’s not.

Kozakura too was not as strong as she first appeared, as she was far more frightened in the Otherside than Sorao, who doesn’t seem to be frightened at all anymore.

Of course, we have no idea what the Otherside is yet, or who the beings are occupying it.

Is it real or a dream? Is it a parallel universe, or a ghostly realm? Are the girls in danger there, or is it all an illusion? Where is Satsuki, and why was she being used to fool Toriko into kill herself?

With many questions and few answers, at least we saw major character development in all three girls in this episode.

Toriko may also be onto something, as she believes fear is how beings in the Otherside are contacting and then controlling them.

Episode 5 will hopefully make things clearer on that score.

The only letdown in Episode 4 of Otherside Picnic then was the Space-Time Man, who appeared briefly but didn’t seem to have a connection to the story.

Onwards to Episode 5, with recaps of the first three episodes on Leo Sigh here.