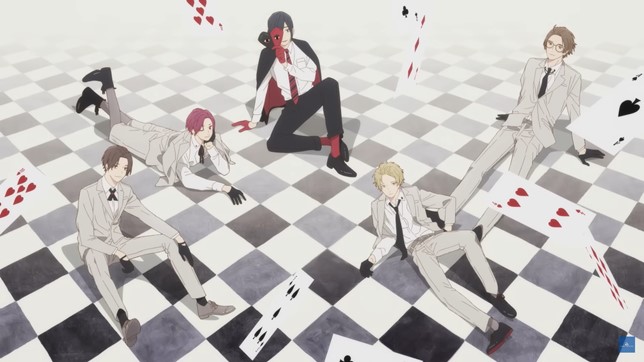 I don’t know what it is about the ongoing anime Play It Cool, Guys that grabs my attention so much. Especially as little of consequence happens in any episode.

Sure, the slice-of-life anime has cute, quite oddball, and not-too-bright guys and it is funny, but I think it is more likely the laid-back, chill vibe the anime has that makes me feel so satisfied after watching.


Add in that, at only 11 minutes or so an episode, Play It Cool, Guys is a fast binge-worthy anime that is so light-hearted and delightful, I find myself emitting a happy sigh at the end of each one.

Now the second cour of Play It Cool, Guys kicked off on Monday night and, with the addition of author Motoharu Igarashi (watch his cute character video here), I am enjoying it even more.

A second cour, by the way, that came with a charming and upbeat Play It Cool, Guys second cour creditless opening animation and opening theme song release today.

The anime’s opening theme song is ‘Warauna!‘ (aka ‘Don’t laugh!’) by singer, songwriter and well-known Vocaloid producer syudou, and it has such a catchy, foot-tapping, head-nodding beat that, after watching the Play It Cool, Guys second cour creditless opening animation through about four times, I then had the song on repeat for the best part of an hour on Spotify.

Check out the just-released Play It Cool, Guys second cour creditless opening animation below, and the anime’s opening theme song, and you will see what I mean.

Then you can do the same as I did via the Spotify player below.

The second cour of the anime premiered on Crunchyroll last night with Episode 13 “Reunion” and, with Takayuki being even more clueless than usual (if that is even possible) it is an exceptionally endearing watch.